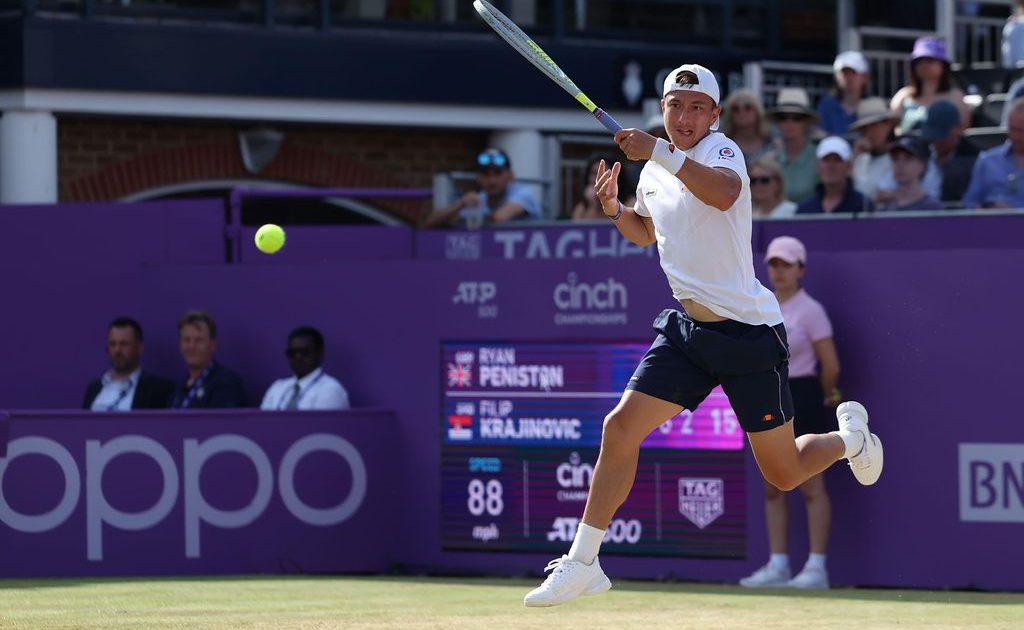 Ryan Peniston admitted he has had worse weeks after earning a £100,000 pay day at Queen’s Club.

The British number seven, barely heard of outside tennis circles a few days ago, saw his dream run at the cinch Championships – his first appearance in an ATP Tour main draw – ended at the quarter-final stage by Filip Krajinovic.

Yet Peniston’s charge to the last eight, courtesy of wins over Francisco Cerundolo and top seed Casper Ruud, earned him £50,000 in prize money, almost double his earnings for the rest of the year.

Moreover, his performances this week also secured the 26-year-old a Wimbledon wild card, guaranteeing him at least the same amount again.

It is a far cry from all the weeks and months spent traipsing around the lower-tier Futures Tours since Peniston turned professional in 2018.

He can now invest in more of a support team – although Peniston admits he may also treat himself with his windfall.

“It’s definitely a lot of money,” smiled the left-hander from Southend.

“I was playing on the Futures Tours a couple of years ago and then the Challengers. So it’s definitely going to help my career a lot. I’m just going to reinvest it in myself.

“Just being able to pay for training and travel and now I’m starting to be able to afford a coach to travel with.

“The next step is being able to afford a physical trainer on the road, which I think is super important, and trying to basically improve the team and have them as much with me as possible.

“I’m going to remember a lot from this week I think, for sure. Definitely a few feelings that I had, like after the win in my first round and then the match point in my last match in the second round.

“Those feelings will take a while, I think, to forget.

“Will I treat myself? Maybe. I’ll think about that after Wimbledon.”

Peniston looked on course for the semi-finals when he took the first set on a sweltering day in west London.

But experienced Serbian Krajinovic hit back for a 4-6 6-3 6-3 victory to end British interest in the singles.

As well as his cash injection, Peniston will also move up 35 places in the rankings to 145 in the world, with his next target breaking the top 100.

In an impressive start to the match, Peniston had already created seven break points before he finally struck for 5-4 after Krajinovic dumped a volley into the net.

A forehand winner which clipped the baseline brought up the opening set in just 47 minutes.

With the temperature touching 33C on centre court, Krajinovic threatened to boil over when he was called for a foot fault, but the 30-year-old grabbed the only break to level the match.

When Peniston’s forehand crashed into the net following a fine return of serve Krajinovic moved a break ahead at 3-2 in the third.

Peniston won an epic rally with a diving volley at the net to haul himself level, but his inexperience showed when he immediately double-faulted on his way to dropping serve to love.

After Peniston floated a forehand wide on match point, Krajinovic said: “That was really tough.

“He’s going to be a very good player, I wish him all the best.”

Peniston will now move on to next week’s tournament in Eastbourne having been handed a wild card.

Krajinovic will meet Marin Cilic in the last four, in what will be his first semi-final on grass, after the Croatian beat Finland’s Emil Ruusuvuori 7-6 (2) 6-4.