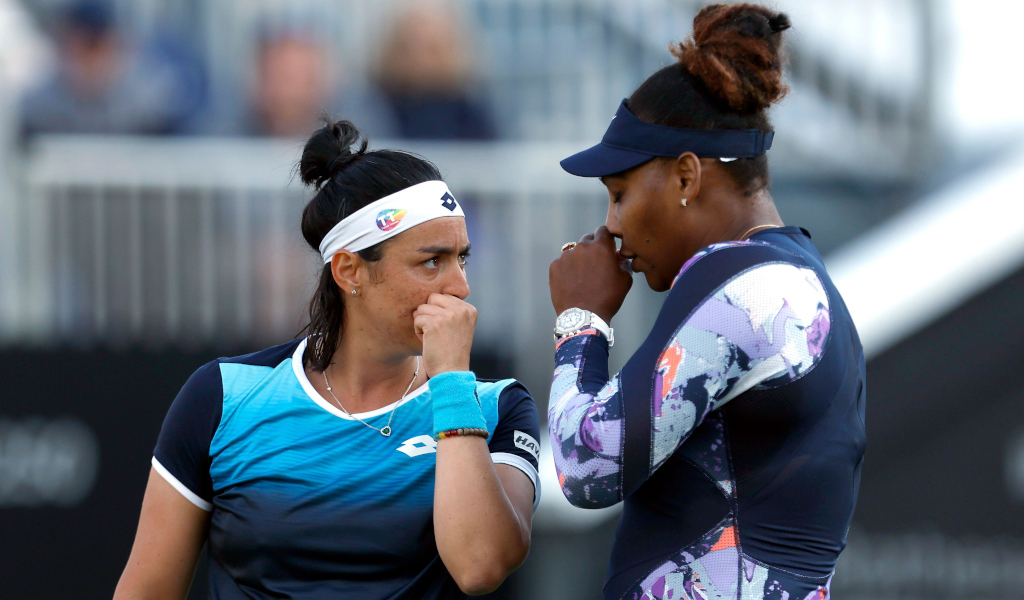 It took the new Serena Williams-Ons Jabeur partnership a while to get going, but once they found their rhythm they produced a good comeback beat Marie Bouzkova and Sara Sorribes Tormo at the Eastbourne International.

As expected, 23-time Grand Slam winner Williams and Jabeur looked a bit sluggish early on, but they eventually settled and came away with a 2-6, 6-3 (13-11) victory in one hour and 32 minutes at the Devonshire Park Lawn Tennis Club.

Well that was a whole lot of fun 😜

Playing for the first time in nearly a year and using the tournament to get some game time under her belt ahead of Wimbledon, Williams started confident enough on serve with a solid hold.

However, it unraveled soon as Bouzkova and Sorribes Tormo upped their game, breaking twice to race into a 5-1 lead before serving it out to take the opening set.

They kept that momentum early in the second set with a break in game three three, but Williams and Jabeur hit back immediately only for the Czech-Spanish pair to break again for a 3-2 lead.

Again the lead didn’t last long as Williams and Jabeur drew level at 3-3 and a third break in game eight saw them take it to the super tie-breaker.

After several mini-breaks, Williams and Jabeur failed to convert match points at 8-9 and 9-10 before Bouzkova and Sorribes Tormo also wasted a match point at 11-10.

There was no mistake on the third match point as the American-Tunisian duo claimed the win to reach the quarter-final where they will face Shuko Aoyama and Chan Hao-ching, who defeated fourth seeds Sania Mirza and Lucie Hradecka.

“It was so fun to play with Ons, it was great, we had a lot of fun,” Williams told Tennis Channel.

“Our opponents played amazing, we just trying to stay in there after the first set. It was good though.”

Asked how the doubles partnership came about, Williams quickly replied: “I called her, she has been playing so well and I knew I needed to play some matches. She has always been so sweet to me on the Tour so I was like ‘it would be fun to play’.”

Ons said: “It’s an honour that she picked me, to be honest. I couldn’t believe it. I was having dinner and it was crazy.

“It was so much fun. I was a little bit nervous before, playing with such a legend. She made me [feel] really good on the court, even when I made mistakes she kept encouraging me so thank you for that.”