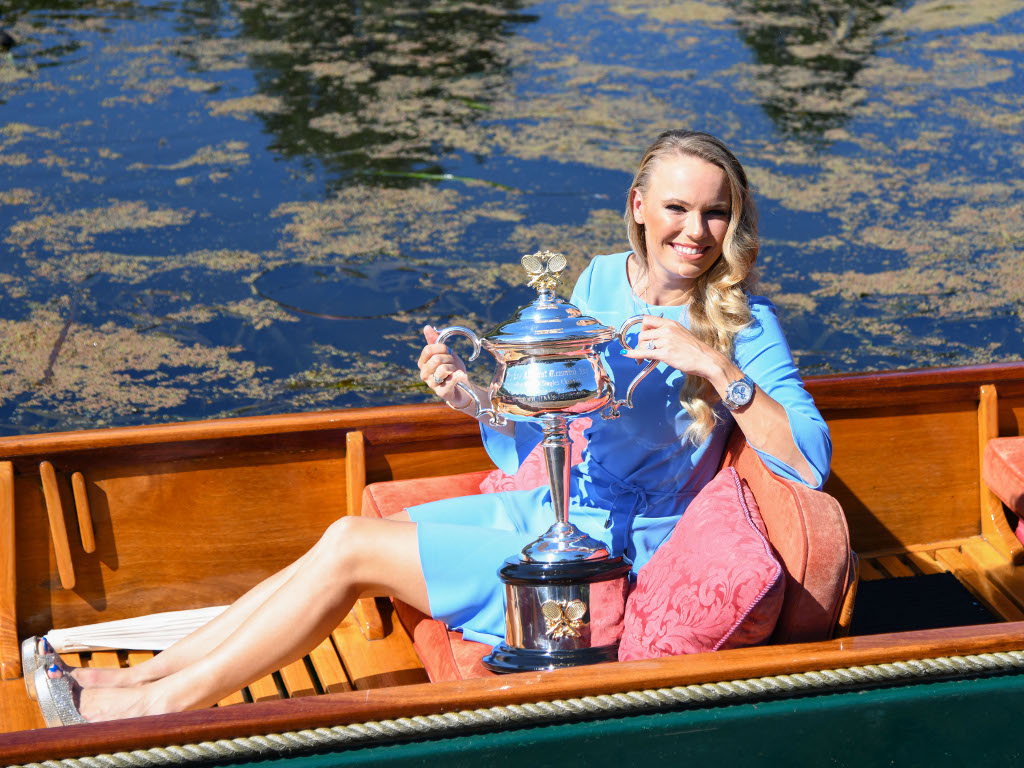 The Dane beat Simona Halep in three sets on Rod Laver Arena in what many felt was one of the best women’s finals in recent years to win her first major after losing her two previous finals.

Let’s start with Billie Jean King, who handed over the trophy to Caroline Wozniacki on Saturday and she also tweeted a kind message.

A match for the ages. Two warriors both worthy of the win. An absolute joy to present the Daphne Akhurst Memorial Cup to @AustralianOpen women’s singles champion, @CaroWozniacki. So proud of women’s tennis on this day and everyday. pic.twitter.com/39WmlGJqbY

Serena Williams and Wozniacki are good friends as they even holiday together and of course the American congratulated the Dane.

I got too nervous to watch but woke up to @CaroWozniacki new number one and aussie open champ. So awesome. So happy. Are those tears? Yup they are. ?? from a year ago to today I’m so proud my friend so proud. Literally can’t even sleep now

Former Wimbledon winner Marion Bartoli, who will make her tennis comeback in a few weeks, felt it was “one of the best women’s finals”.

I think one of the best women’s final I ever seen. Talking about incredible fighters on the court tonight. I am so sad one had to lose because they both were beyond AMAZING!!! @Simona_Halep @CaroWozniacki @AustralianOpen @EurosportFrance #AusOpen #Wozniacki #Halep pic.twitter.com/ErOfw5x0md

British No 1 Johanna Konta was another who was delighted with the quality of the tennis.

I’m so incredibly proud to be a part of women’s tennis in this day and age. What a tournament for both @CaroWozniacki and @Simona_Halep ???????????? @WTA @AustralianOpen

Petra Kvitova didn’t watch it, but was happy for Wozniacki.

I was flying for the final and it sounds like I missed a great one! Congratulations @CaroWozniacki on your first Grand Slam and bad luck @Simona_Halep – you are both champions! See you soon ??

Short and sweet from Victoria Azarenka.

What an #ausopen final ???? two absolutely incredible athletes and fighters. Im so emosh right now for both of them ??

Even the men got in on the act with Kevin Anderson saying the Dane “deserves it”.

So happy for @CaroWozniacki for winning the @AustralianOpen. You deserve it! Congrats to @Simona_Halep on a great run too. You were both so gracious in victory and defeat. It was an incredible final! I’m a huge fan of both of you ??

What a match !!! @CaroWozniacki v @Simona_Halep …both players deserve all the credit in the world but it’s #Wozniacki time to shine ! #1 #Champion

Andy Roddick was another who was delighted for Wozniacki.

Couldn’t be happier for @CaroWozniacki !! Enjoy your moment !!! #HOF I want that moment for @Simona_Halep . It’s coming ……

Well done Caroline Wozniacki for winning her 1st GS. Persistence, Determination, Drive and willing to be more aggressive got her there. Couldn’t have asked for a better women’s final.

Oh and another great Dane in Peter Schmeichel, the former Manchester United and Denmark goalkeeper, was proud.

Many congratulations ????@CaroWozniacki you are making all of us ???? so very proud. #PureClass #No1 #champion #Australienopen