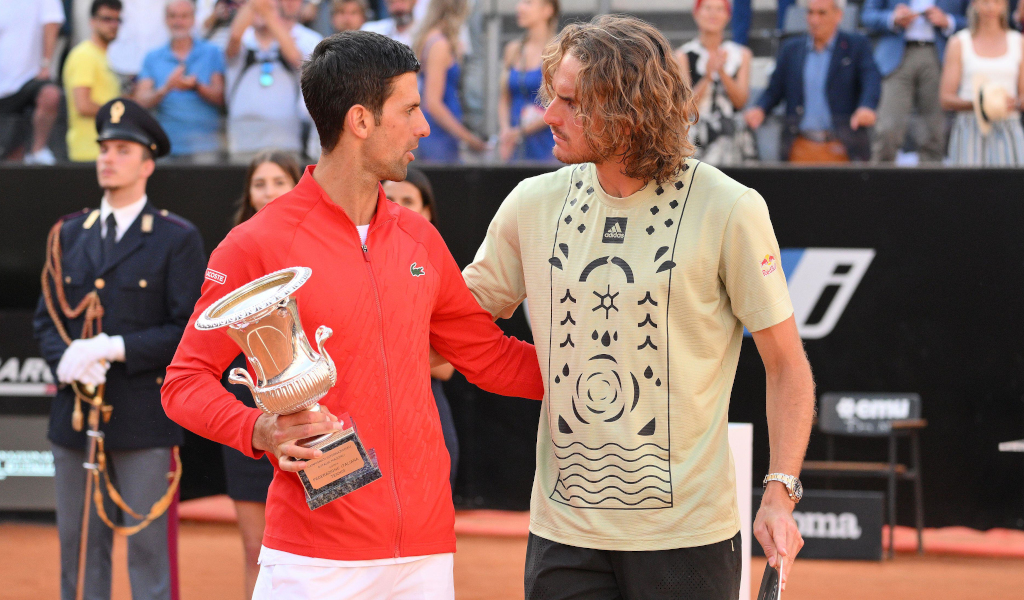 There was high praise for Novak Djokovic from Stefanos Tsitsipas after the Italian Open final with the latter describing the world No 1 as a “very wise person” and admitting that he would like to emulate the Serbian when it comes to professionalism.

En route to lifting the trophy, Djokovic also cemented his place at the top of the ATP Rankings ahead of the French Open and he won his 1000th Masters match while he also won a record-extending 38th Masters 1000 title.

Besides being one of the best players when it comes to tennis skills, the 34-year-old Serbian has also been praised for the way he looks after himself whether it is through exercise, diet, meditating or spirituality.

“Novak is a great champion. I have so much respect for him. Every single decision he has made, I understand it, even the ones in the past. I support them,” the Greek said.

“He’s like a Formula 1 car: every single small detail can disrupt his rhythm. He makes sure every single thing that he does is reaching as close to perfection as possible. Of course I cannot neglect that and not feel inspired by it because it’s professionalism to the fullest.

“In terms of talking about tennis legends and breaking records, when it comes to all these things, I personally think he’s one of the most professional and the best of them all.”

The Italian Open final was a rematch of the 2021 French Open, but Tsitsipas produced a better match at Roland Garros last year as he lost in five tight sets against Djokovic.

This year’s clay-court Grand Slam gets underway on May 22 and Tsitsipas admits he needs to improve his game as he declared Djokovic and world No 6 Carlos Alcaraz as the players to beat in Paris.

“Right now, Carlos Alcaraz or Novak Djokovic. They both play great, great tennis. I would put them as favourites,” the world No 4 said.

“Right now, I need to improve a few things in my game. I don’t know if I’m going to get there, but I hope I do with my hard work by the time Roland Garros begins.

“I’d love myself to get around with these players and be there with them. But I will really need to put a bit more attention to detail in the next couple of weeks.”