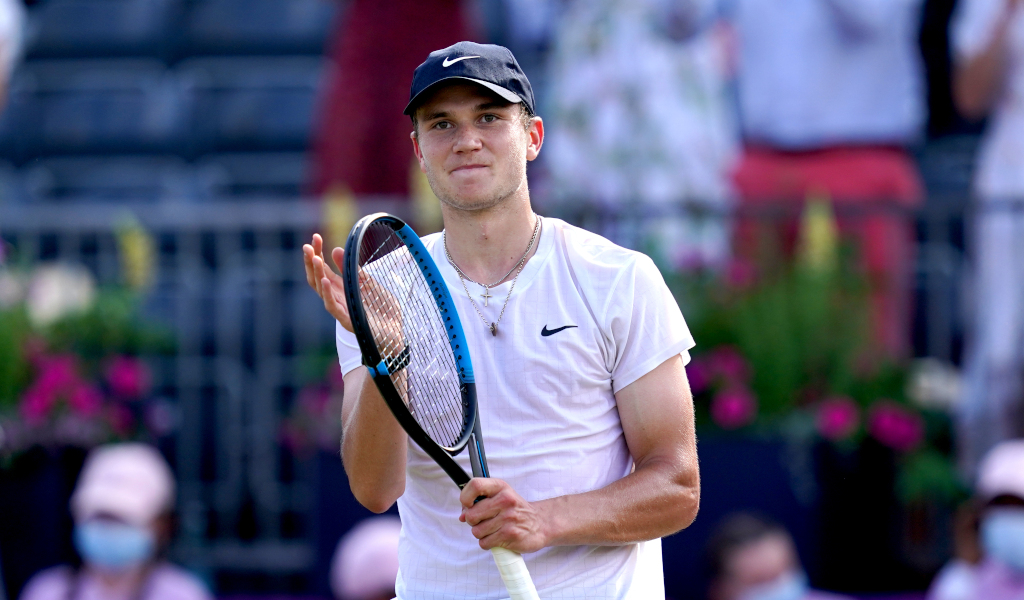 Jack Draper and Ryan Peniston starred on a stellar day of British success at the Surbiton Trophy on Wednesday.

In his first match since recovering from injury, Londoner Draper started his grass court season with a confident 6-2 6-2 win over fellow Brit Billy Harris on Centre Court.

The 20-year-old was forced to pull out of French Open qualification due to injury, and was pleased to bounce back with victory on home soil.

Draper now goes on to face fellow Brit Ryan Peniston, who picked up the biggest wins of his career over world No.69 Adrian Mannarino.

Peniston commented: “It’s a huge win, I could say the biggest win of my career really. It gives me a huge confidence boost and I’m just really, really happy with how I fought and how I played.

“After all the hard work you put in day in, day out, it makes you feel pretty good, after a win like that it makes it all worth it. It gives me a lot of confidence for the rest of the grass season.”

There was also success for another wildcard, Paul Jubb, who beat the experienced Mikhail Kukushkin 6-4 7-6(11) in round one and now faces Finnish qualifier Otto Virtanen in round 2.

“There are so many good things happening in British tennis at the moment and when one of the British players does well, you want to try and add to the success story,” said Jubb.

“All the young guys coming through at the moment are a great bunch and we are all so close with each other. We message and push each other on to succeed and there is a great feeling among the guys that has to be positive for what we are all trying to achieve.

“I’m sure all the Brits would agree with me when I say this is our favourite time of the year and we all have a great chance to succeed and try to enjoy it as well.”

Twickenham’s Alastair Gray – who is supported by the LTA’s Men’s and Women’s programme, designed to provide a platform for players as they progress towards competing in Grand Slam competition in singles and doubles and/or representing Great Britain in Davis or Fed Cup – also reached the second round, winning an all British battle against qualifier Mark Whitehouse 6-3 6-2 to set up a meeting against Australian Christian O’Connell.

While there was also victory in an all British battle for Liam Broady, with the Stockport ace battling through rain delays to be good friend Jay Clarke 4-6 6-3 6-2.

Meanwhile Kingston star Jodie Burrage, 23, picked up one of the biggest wins of her career, beating third seed and world No. 99 Lin Zhu 7-6(5) 6-3 on home soil to progress to the second round of the women’s draw.

Burrage – who is on the LTA’s Pro Scholarship Programme – the highest level of support for players aged 16-24 – will now face either former Wimbledon finalist Sabine Lisicki or Kateryna Bandl in the second round, with a place in the last eight at stake.

There was also victory for Brighton’s Sonay Kartal against fellow Brit Lily Miyazaki, with Kartal beating her recent practice partner 6-3 6-4 after a rain delay at 4-4 in the second set to set up a meeting against American second seed Madison Brengle.

The world No.284 commented: “I was training a lot with Lily the past week so we both kind of knew how each other plays. She doesn’t give you much rhythm so to play her on the grass is definitely a tricky surface but I just tried to keep my game, how I’ve been playing and tried to keep a lead throughout the match.

“Coming off at 4-4 in the second set with the rain delay was tough so yeah the biggest thing coming back from that was just to keep my focus and not kind of get complacent.”

There were also battling displays for Harriet Dart and Eden Silva, who both fell in three sets.

Teenager Isabelle Lacy – who is supported by the LTA’s Men’s and Women’s programme, designed to provide a platform for players as they progress towards competing in Grand Slam competition in singles and doubles and/or representing Great Britain in Davis or Fed Cup – also saw her run come to an end, with the 15-year-old Londoner falling 6-3 6-2 to Mariam Bolkvadze after two wins in qualifying.

Andy Murray is in action again on Thursday at the Surbiton Trophy, as he steps up his preparations for Wimbledon.

For the latest action on the British summer grass court season, check out the LTA website.