A moment in time: When Sergiy Stakhovsky ‘kicked the butt of Roger Federer’ at Wimbledon 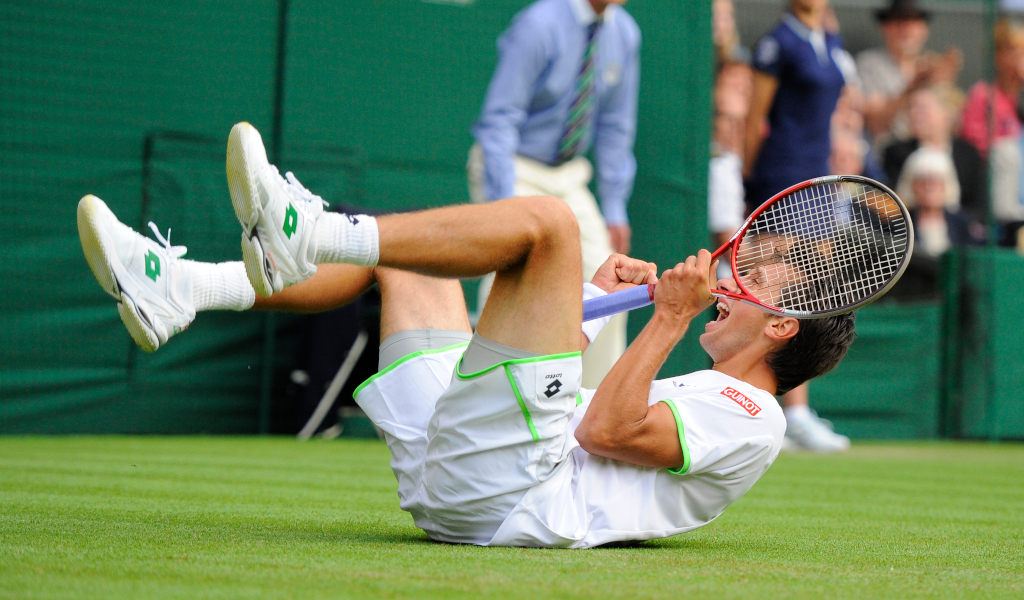 When Roger Federer won his sixth Gerry Weber Open at Halle in 2013, it appeared all was well with the world No 3’s Wimbledon preparation. However, a closer look would suggest reason for concern.

It was Federer’s first title since August 2012 and “only” an ATP250 event. The Swiss had also dropped sets against Tommy Haas in the semi-final and the final itself against Mikhail Youzhny whose previous head-to-head against the Fed was 0-14. This was no normal pre-SW19 cruise. The 31-year-old had already been hampered by back injuries earlier in the year at Indian Wells and would later express regret at playing through the pain.

Centre Court can make other problems melt away when you are a seven-time champion. The glitzy white jacket came out of the wardrobe as if to say “look who’s in town”. In the first round, the holder breezed past Victor Hanescu for the loss of just five games in 69 minutes. On the same day, unfancied Belgian Steve Darcis knocked out Rafael Nadal in straight sets. Early indications were that things were looking up for number eight.

The Swiss’s second-round opponent was world No 116 Sergiy Stakhovsky whom he had beaten on the hard courts of Dubai in their only previous meeting. The 27-year-old had claimed a grass-court title at the lesser spotted Rosmalen venue in 2010 but had won 12 matches on the green stuff compared to Federer’s 13 titles.

It soon became clear this would not be a procession as the underdog began the first of his 96 advances to the net. When Federer took the opener on a tie-break, it appeared he would surely prevail having been nudged into a higher gear. However, Stakhovsky’s levels added up to far more than just spirited resistance. He was serving well, mixing up lobs, drives and volleys with the chip and charge routine that took the King of Centre Court out of his palatial comfort zone. It was also enough to edge the second set tie-break.

In the third set, there was still no break of serve on either side as the games rolled on to 5-5. The crowd could sense Federer’s creeping irritation at not even being able to move his opponent back. Finally, at the 34th of asking, the Swiss blinked first on his racket to cede the set 7-5. He moved towards his cherished chair with a look of disgust and a mini scowl. It was all bubbling up inside.

Worse was to come as Federer lolloped a backhand volley tamely into the tape to lose serve again early in the fourth. He broke back for 3-3 but the lack of swagger was all too obvious.

At 4-3 down in the fourth, that ferocious frustration blew his opponent’s way. A 96mph Federer backhand carried a message of “do you know who I am?” at his opponent’s head. Stakhovsky ducked and the ball went long. There was no hand raised, no fake apology. When asked about it in the press conference, the vanquished 17-time major winner curtly replied: “This is not the juniors here.” It wasn’t quite Nick Kyrgios but there was venom there.

The crowd were desperately baying for a fifth, a script written for an extra-time comeback in injury-time. Their hero simply doesn’t lose on day three of a major and was defending a proud record of 36 consecutive Grand Slam quarter-finals

The charge of the yellow and blue brigade simply wouldn’t stop nor would the unerring accuracy. A backhand screwed wide at 6-5 in the fourth set breaker was the final ball hit in anger at 8.15. Federer had fallen before the watershed.

Stakhovsky collapsed on his back, tipped an imaginary hat to the audience while his opponent scratched his head, departing prematurely in more ways than one. The victor was respectful in his analysis up to a point: “There’s another five rounds. But right now I can definitely tell my grandkids, I kicked the butt of Roger Federer.”

Everybody now wanted a piece of Wimbledon’s unlikely new star and the intelligent, multi-lingual friendly giant lapped it up graciously. Despite being treated to a syrupy Garry Richardson interview on BBC, he promised to do everything to build on the win. Sadly, he lost to Austrian Jurgen Melzer in four sets on court three. After the Lord Mayor’s show and all of that.

Stakhovsky reflected on his 48 hours of fame: “You give so much energy into the match, you fight so hard. It’s hard to come back and play again with those emotions after that.”

Nine years later, he is ready to fight on another front after retiring in January. Success on a show court has nothing on that.