A moment in time: Roger Federer vs Rafael Nadal – The finale of the Wimbledon trilogy 2008 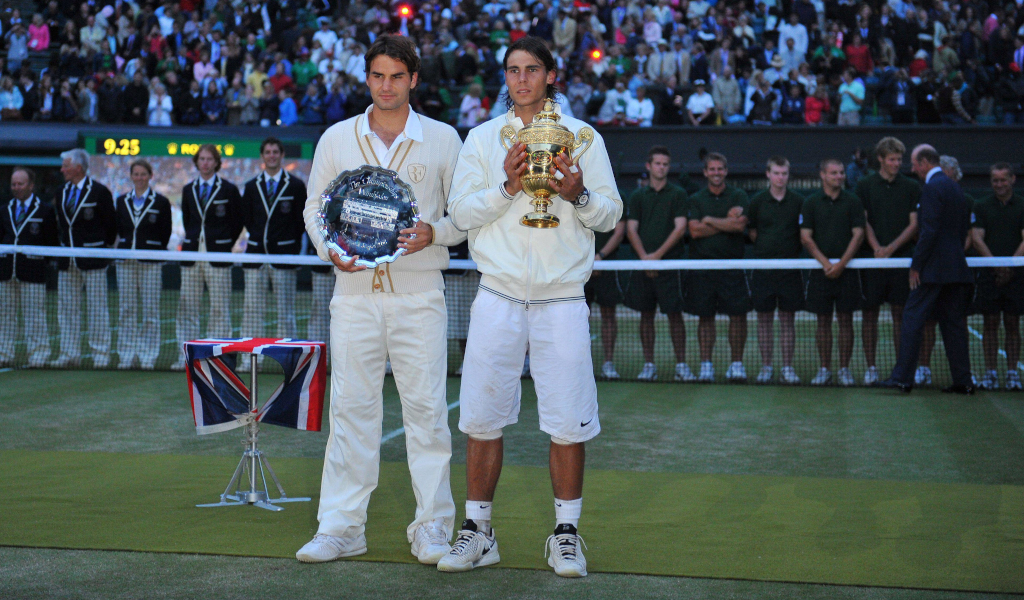 There are only 12 weeks to go until Wimbledon and the Centre Court centenary. The countdown has begun and what better way to prepare than taking a time machine back to July 2008 on that famous piece of turf.

When the third movie of a franchise rolls out, the mind generally begins to wander, the script becomes more forced and the impact of the original is a distant memory. The development of the story is essential to keep it compelling.

This is exactly what the ‘Fedal’ trilogy of Wimbledon finals provided between 2006 and 2008. These matches were never as predictable as the domination that took place on King Rafa’s court at Roland Garros between the same players in the same years. Grass was Roger Federer’s regency but with every passing July, Rafa Nadal was making the necessary steps to enter the Swiss’s territory as an equal.

A moment in time: When Sergiy Stakhovsky ‘kicked the butt of Roger Federer’ at Wimbledon

In 2006, Federer was going for his fourth Wimbledon on the bounce and had never really considered the 20-year-old second seed as a contender. Ultimately, Federer prevailed in four, but said at the time: “It was important for me to win a final against him and beat him for a change, and the easiest way was at Wimbledon.” It would never be easy again…

Nadal tried again in 2007. This time he was on the wrong side of a 7-6, 4-6, 7-6, 2-6, 6-2 scoreline: “I was ready to win it that year, and I thought that could have been my last chance to lift the Wimbledon trophy.” The second loss, he wrote in his autobiography, left him “utterly destroyed” as he had “flagged mentally”. Spain’s Raging Bull promised this would never happen again if a third opportunity presented itself.

The run-up to 2008 was different. Federer had lost to his rival in the 2006 and 2007 finals at the French Open but had always secured a set and been competitive up to a point. This time, the 22-year-old had wiped the floor with the world No 1 for the loss of just four games. It was brutal, unstoppable tennis. Federer threw a “celebration” with forty friends in the aftermath. That was a hell of a coping mechanism…

When play began on that special day in London on July 6, Federer was abruptly broken in the third game which was not in the script. There was no gentle easing in here. The Spaniard’s serve pounded the Swiss backhand as if to say “this one is on my racket, not yours”. The matador with muscles claimed the first battle 6-4.

The second set started with the Fed express motoring to 3-0 and 4-1 up. However, when Nadal broke back and his opponent messed up a chance to get 5-3 ahead, Federer turned to a badly timed lone voice in the crowd and “shut up”. Rafa noted that Roger was “more worked up than I remembered seeing him”.

Federer had converted just one of eight break points as Boris Becker noted a change in his normal second Sunday demeanour: “Federer looks a bit apprehensive, he’s not playing with his instinct. He’s too far behind the baseline in my opinion.” He collapsed in his next service game to cede the second set 6-4 as well.

At 3-3 and 0-40 in the third, it looked as good as over until from somewhere down in his SW19 highlights reel, the champion reeled off five straight points. At 5-4 up, the Swiss had respite as the rains came. There was an 80-minute break to think about how to change the course of a match which was being entirely directed and driven by what was happening on the other side of the net. Federer remembered a significant change in tactics: “I believe that rain delay probably woke me up. I said: ‘If you’re going to go out of this match, at least you’re going to go down swinging.'”

The first, and potentially last, tie-break came. Federer took a 5-2 lead with some freer forehand hitting. Although Nadal chiselled back to 6-5, a booming ace clinched it. We had a match.

The trouble was that Nadal’s rasping groundstrokes and grit were brutal. This was a laser focus that threw a whole heap of ridiculous pressure on the title holder at 4-5, 0-30 but he came through again with big serves and forehands It was tie-break two to signal a changing of the guard or an epic fifth set.

Nadal charged 4-1 up and appeared to have one hand on the trophy. At 5-2, he had two serves to win it but, suddenly the timing gave way to tension. He double-faulted and then dumped a backhand into the net. Federer had a set point but then put a makeable forehand wide and saved himself again with a boomer ace. It was Nadal’s unbelievable running forehand pass for 8-7 with two serves to come that brought him a second match point.

However, out of nowhere, Federer drove a dream one in ten chance backhand pass down the highest part of the net. Andrew Castle said on commentary: “The two best passing shots of the tournament, without doubt, have just taken place on the last two points.” The now fired-up Fed took the next two points to square the match.

A shorter rain break interrupted the fifth at 2-2 just before 8pm. Minds raced to the possibility of a Monday finish for the first time since Rafter and Ivanisevic prompted sudden sick notes across multiple offices in 2001. They took cash on the door that day…

Back they came at 20:30 with perhaps an hour of natural light to finish this match, a match that deserved to be played out in full on the night. It was now or never and the now came at 7-7 when a couple of brutal Nadal backhands opened the door as Federer’s forehand hinges creaked at the critical moment. 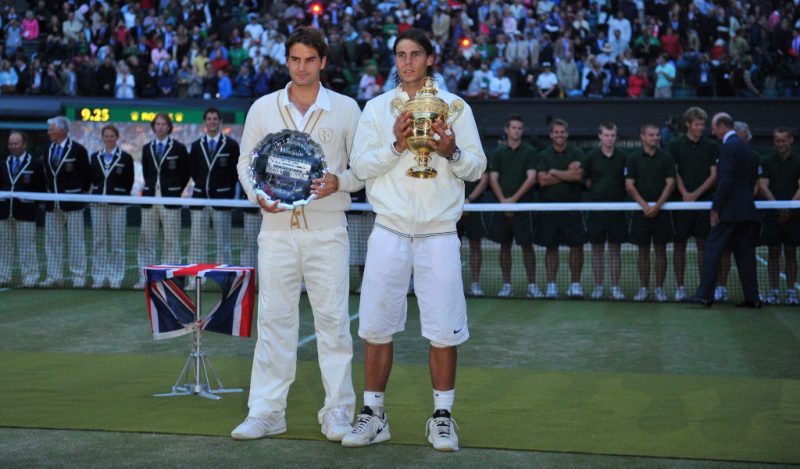 When Nadal served for the match, he steeled himself for the task ahead with a sudden change-up to serve and volley: “My mind was clouded by nerves. I had to conquer those nerves right now and the way to do it was to raise my aggression.” After four hours and forty-eight minutes and another four match points, the King of Centre Court was toppled just after the watershed as he netted a forehand in the gloom. Nadal fell to the ground in exultation and total relief.

Just over a month later, the young pretender had ended Federer’s record 237-week reign as world No 1. The Roger and Rafa show pulled in a peak 12.8 million viewers on BBC alone compared to just 7.4 million the previous year. It was a sequel that truly topped those first two popcorn movies.