Tennis365’s exclusive masterclass from elite coach ahead of Wimbledon

It’s that time of year when the urge to pick up a racket is at its strongest, so Kevin Palmer caught up with a top tennis coach to learn how it’s done right.

The public tennis courts will be packed for the next couple of weeks as Wimbledon fever grips the nation and it doesn’t take long for an amateur player to appreciate how tough it is to play like Roger Federer or Rafael Nadal when they take to the court themselves, especially on grass.

We wanted to give our readers some tips before they ventured out on to the courts and few are better qualified in Britain than LTA Level 5 elite coach Marc Codling, who is head coach at the prestigious Stoke Park club in Buckinghamshire.

With 25 years of coaching experience behind him, Tennis365 got a chance to quiz Marc on five keys areas for amateur players to improve on in an exclusive coaching masterclass ahead of Wimbledon.

POSITION ON THE COURT

Marc says: Even on a grass court now, the sport is based around playing from the baseline, but the best players can vary that approach. Roger Federer has reinvented himself a little in the last few years and Novak Djokovic is looking to come into the net a little more now, as we have seen at The Boodles event at Stoke Park in the last couple of days. That is one way to beat someone like Rafael Nadal, who is so good from the back of the court, so we are seeing players adapt the way they play to try and overcome a dominant baseliner. 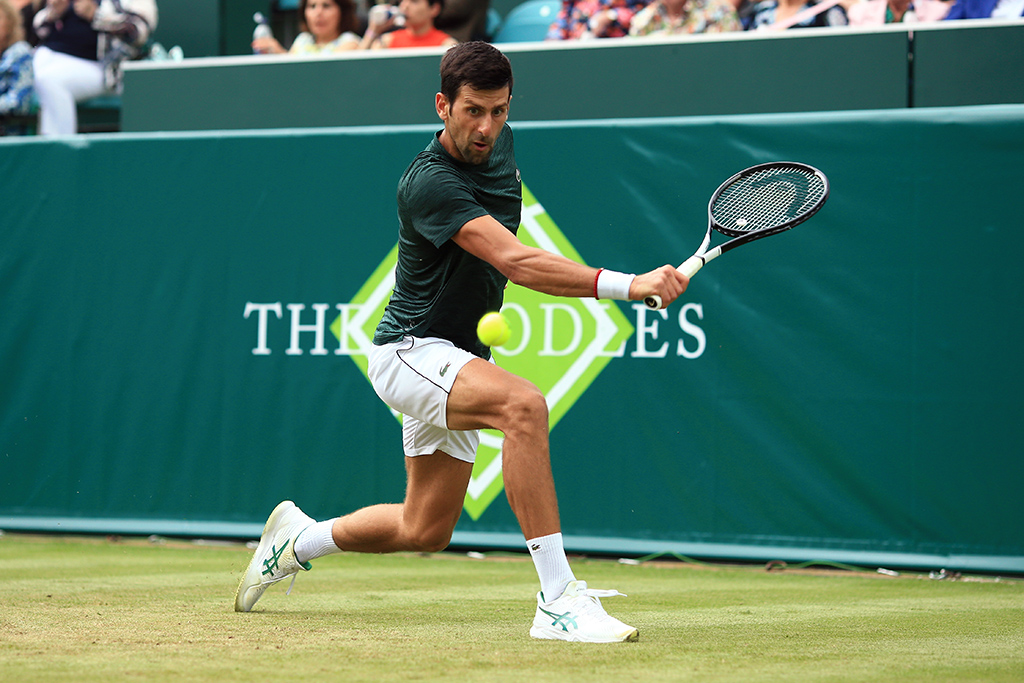 Marc says: I think slice is really important and it is a key skill to have because on grass, the ball tends to stay low and skid. As you look to approach the net, a slice shot can be so valuable to get you into position to win a point.
Slice offers two benefits as first of all it will keep the ball low on the court and secondly, it will force the opponent to hit the ball up and that will help you with your volley.

Marc says: I feel we may now see a resurgence in players who excel in volleying for a couple of reasons. Firstly, it is a good way to win the point quickly and that can be important in a long match or if you are at the back end of your career, as some of the biggest stars in our game are now. As we saw last week, the two big winners on the ATP Tour were 37-year-olds in Federer at Halle and Feliciano Lopez at Queen’s Club, who both like to come to the net and mix up their game.

If you are an attacking player, you need to be able to volley and it is not an easy skill. Your reaction time is cut down dramatically when you are at the net, so you cannot swing the racket as much as you would at the back of the court as it would be impossible to control the ball. The important factor as a volleyer is to cut your swing down, get your body weight moving forward and give yourself the best chance of making solid contact in front of you.

The grip is also vital in volleying and we want to see a chopper grip that allows you to be able to play forehands and backhands with the same grip and also low and high volleys.

Marc says: A lot of club players spend a lot of time working on their first serves, but maybe they should spend more time developing a strong and reliable second serve. If you have confidence in your second serve and believe it will work for you, it gives you a chance to go for more on the first serve.
Club players tend to have a second serve that is just a slower version of their first serve, but that tends to become a more negative shot as a match gets tight towards the end.

The way to deal with that is to develop some slice or topspin on the ball and you can do this by hitting different parts of the ball as you serve, which helps you to develop spin. It is also vital that you maintain your racket head speed at all times through the service motion to allow greater amounts of spin.

Marc says: When I am teaching a young child who has never played tennis before the basics of the game, I start them with a doubled handed backhand. The reason? It is just easier to master and gives you more control, which is why we see so many players at the top of the game using it.

However, a single-handed backhand is still a wonderful shot to have in your armoury for a number of reasons. You have more reach with a single hander, you can switch between slice and forehand very easily and the best volleyers in the game have tended to be single-handed.

“I started as a kid with a double-handed backhand and then let go. That left-hand is just decoration right now." 😂