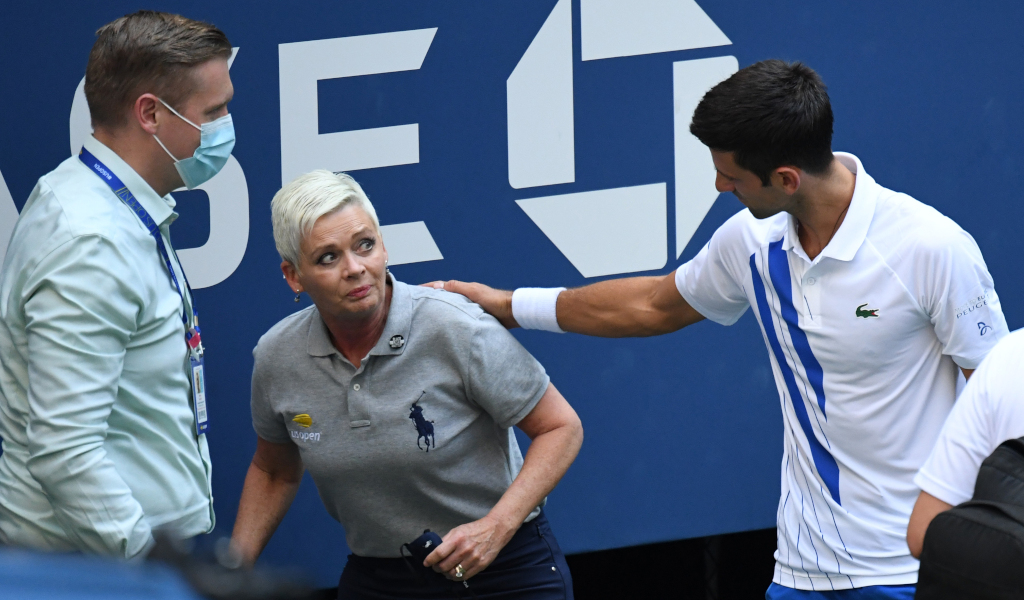 Cricket has had apologies coming out of its ears in the last week or so. Over the years, tennis has had its moments too, from Novak Djokovic being “extremely sorry” to Serena Williams losing her shot at history and the BBC insulting Marion Bartoli.

Novak Djokovic was playing a tight first set against Pablo Carreño Busta in the fourth round of the 2020 US Open when he hit a ball in anger behind him. Unfortunately, said ball hit a rather shocked lineswoman.

Referee Soeren Friemel said he had “no other option” but to disqualify the Serb, “based on the fact that the ball was hit angrily, recklessly, that it went straight at the line umpire’s throat”.

For his part, Djokovic immediately went to aid the official but only expressed his regret later for the injury he had caused. He originally walked from the court and was seen leaving in his car and heading for his rented home.

In a social media post, he wrote: “I’m extremely sorry to have caused her such stress. So unintended. So wrong.”

2) Alize Grieves over her quarantine rant

“Don’t be mad at me Aussie people, you’ve always been one of my favourite. I promise I’ll stay quiet for a while.” These were the backtracking words of Alize Cornet who thought that Melbourne was playing mean ball to over 70 players who were forced to take a hard two-week hotel quarantine lockdown on arrival in January. The French player was reminded that she was better off than many Victorian residents who had experienced almost a third of the previous year without liberties.

Cornet had moaned that weeks of practice had gone to waste and that the situation was “insane.” Roberto Bautista Agut also expressed remorse over his comment that it was like prison with “wi-fi”.

Roberto Bautista Agut says quotes comparing quarantine to ‘jail, but with WiFi’ was ‘taken out of context’

Romania captain Ilie Nastase was given a three-year ban by the International Tennis Federation (ITF) after insulting virtually everyone within earshot during the 2017 Fed Cup tie against Great Britain.

Nastase was overheard making an apparently racist comment about Serena Williams’ unborn baby at a press conference and then had the temerity to ask GB captain Anne Keothavong for her hotel room number.

To cap it all off, the former two-time major winner verbally abused chair umpire Jaume Campistol and tie referee Andreas Egli before calling Keothavong and British No 1 Johanna Konta “f***ing bitches” as he was sent from the court. Konta left the court in tears to compose herself although her opponent, Sorana Cirstea, had little sympathy, claiming she been called much worse in her time…

Nastase posted on his Facebook page: “My life remains dedicated to tennis and its audiences, so please accept my apologies, for whatever they may be worth right now.”

Daniil Medvedev didn’t always love New York and New York didn’t always love him. 2019 was a “journey” of eventual hard-won respect. When he took to the court in the quarter-final against Stan Wawrinka he was jeered. In his earlier matches, his crimes had included angrily snatching a towel from a ball “person” and showing the crowd his middle finger while spectators didn’t appreciate his dance after the win over Dominik Koepfer.

“So many people support me, but still so many people don’t like me. I can just say, I try to be myself,” he said with a smile. “I have to say sorry guys and thank you.” The crowd applauded that natural post-match apology. Now, he is king of the city.

Novak Djokovic’s problematic Adria Tour exhibition event in June last year was supposed to lift spirits and bring tennis back gingerly in the midst of a pandemic. Unfortunately – and unsurprisingly – it turned out to be a total and utter PR disaster. The event was played to crowded stadiums, with players hugging and high-fiving each other, playing basketball and dancing The sight of the Djoker limbo dancing in a crowded nightclub wasn’t the best of looks

Djokovic, Borna Coric, Grigor Dimitrov and Viktor Troicki and his pregnant wife all tested positive for coronavirus as did three coaches.

“I am so deeply sorry our tournament has caused harm. Everything the organisers and I did the past month, we did with a pure heart and sincere intentions.” It was all in a humanitarian cause, but left the world No 1 under attack from all sides.

If there was a way of ranking the respect between Roger Federer and Rafa Nadal, then you would need a very long measuring tape. So it came as a huge surprise when the Spaniard had a go at the Swiss for not speaking out on improving player conditions in early 2012.

Nadal said his rival was happy for others to “burn themselves” on issues like the length of the season and distribution of prize money.

7) Serena loses respect and her shot at history

The 2018 US Open final was supposed to be about Serena Williams chasing a record-equalling 24th Grand Slam. Instead, it was a display of tantrums and cheat accusations as she was torn apart by 20-year-old Naomi Osaka in straight sets.

She demanded an apology from chair umpire Carlos Ramos, who gave her a coaching violation, docked her a point for equipment abuse and then handed down a game penalty for some tasty verbals.
While Williams’ meltdown was something to behold, the multiple major winner did reveal a message of apology to the victor: “I am truly sorry. I thought I was doing the right thing in sticking up for myself. But I had no idea the media would pit us against each other. I would love the chance to live that moment over again.” Ahhh. It was all the media’s fault… Nothing like owning it.

8) Serena takes a while to say the hardest word

During the 2009 US Open semi-final against eventual champion Kim Clijsters, Serena Williams appeared to abuse and allegedly threaten a woman line judge. The American was called for a foot fault on a second serve at 15-30, 5-6 in the second set having lost the first. Good timing for a rant. She approached the lineswoman who made the call, shaking her racket and stormed: “I’m going to shove this [expletive] ball down your [expletive] throat.” Or words to that effect.

The outburst led to the then world No 2 losing the match without hitting another ball as she incurred a penalty point. Her lack of contrition after the match was noticeable, but eventually saving face became more pressing a few days later.

“I want to amend my press statement, and want to make it as clear as possible… I want to apologise sincerely, first to the lineswoman, to Kim Clijsters, to the US Tennis Association, and to tennis fans everywhere for my inappropriate outburst.” She was eventually fined a whopping $82,000 by the Grand Slam Committee.

The BBC is getting blander by the day in its tennis coverage – although the wild ramblings of Boris Becker are always welcome. Even so, host John Inverdale managed to shock sleepy middle-class neighbours of SW19 by indirectly insulting the 2013 Wimbledon champion Marion Bartoli.

After the Frenchwoman had beaten German player Sabine Lisicki, Inverdale asked his colleagues: “Do you think Bartoli’s dad told her when she was little: ‘You’re never going to be a looker, you’ll never be a Sharapova, so you have to be scrappy and fight’?” Probably not, John.

The BBC apologised for the crass comments, saying: “We accept this was insensitive and for that we apologise.”

Bartoli said later: “It doesn’t matter, honestly. I am not blonde, yes. That is a fact. Have I dreamt about having a model contract? No. I’m sorry. But have I dreamed about winning Wimbledon? Absolutely, yes.”

Roger Federer felt unable to take part in the 2014 ATP Finals showpiece match against Novak Djokovic at London’s O2 Arena after aggravating a back injury in his semi-final against Stan Wawrinka. It was a hard PR battle to win over a hugely disappointed crowd, but the Fed did his classy best. “I’m sorry I’m here in a tracksuit. I wish it weren’t so.

“I tried everything I could last night and today – painkillers, rest – until the very end, but I can’t compete at this level with Novak. In a final like this and at my age, it would be too risky. I hope you understand.” The Fed was a mere 33-year-old stripling at the time, but did have the excuse to save himself for the Davis Cup final. Obviously, Switzerland won with Federer at the helm. All was forgiven.

Andy Murray was called in at the last minute to play an exhibition match against the Serb to drown our sorrows.