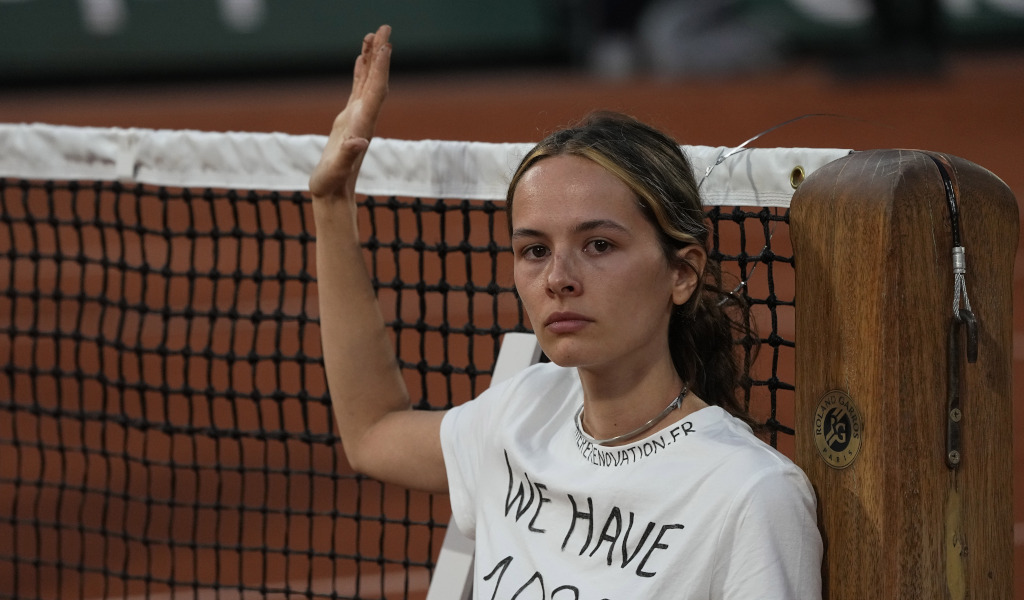 The French Open semi-final between Casper Ruud and Marin Cilic was held up for 10 minutes after a woman who wore a T-shirt bearing the slogan ‘we have 1028 days left’ invaded the court and tied herself to the net.

The woman is believed to be a climate-change protester.

She walked on to Court Phillipe-Chatrier unchallenged during the third set and attached herself to the net, raising serious questions about security at Roland Garros.

Tournament director Amelie Mauresmo looked on as the players left the court for 10 minutes while the woman was removed.

The incident came after Alexander Zverev suffered a serious injury in the first semi-final, forcing him to retire from his match against Rafael Nadal.

“No, really shocking scenes, she jumped onto the court and sat down next to the net and it seems like she has attached herself to the net and had something written on her shirt as well and she has tied something around her neck,” Henman said on Eurosport TV.

“So horrible circumstances for the players, and it’s obviously one of their biggest matches and now you’ve got an interruption midway through this third set.

“The players have rightly been taken off the court and it’s up to the security to get things under control. It’s not what you are expecting, we were so shocked to see the Zverev situation and we get on to the second match, midway through the third set, and it is very unsettling for everyone, it’s unsettling here in the studio.

“It’s unsettling and for the two athletes out on court, you’re so focused on what’s going on in the match and for in that type of context, Ruud is in control, he is up 4-1, two breaks, and he is thinking more of the same and then you get such an unexpected interruption, so it’s not easy from his point of view.

“It’s scary for that type of thing, we didn’t expect that at all and we go back to that mentality of sport, it’s about staying in the present and not worrying about the past because you can’t change it. So to have a protester on the court is unsettling, so I hope they can get back out there and play some great tennis and it doesn’t have an impact on this third set.”