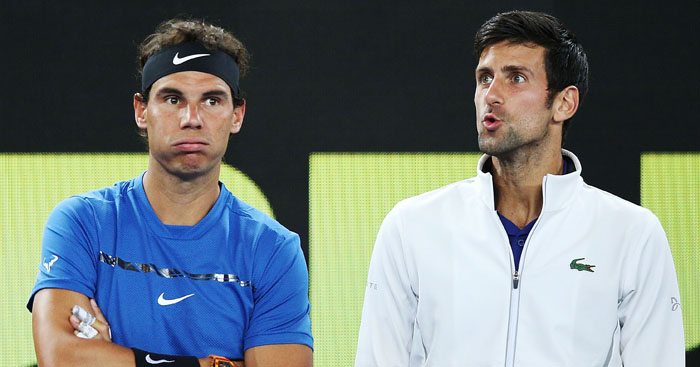 The Australian Open is up and running, and even on day one there appears to be growing angst between Rafael Nadal and Novak Djokovic…

What’s on the site
We have a rather lovely T365 Recall, with Roger Federer’s amazing Australian Open final against Rafael Nadal from 2009 relived.

Back in the present, the full extent of Andy Murray’s condition keeps coming out, this time with his surgeon delivering some bad news.

Meanwhile, at the Australian Open…

What’s in the media
Rafael Nadal could be on an off-court collision course with world number one Novak Djokovic after revealing his displeasure at being snubbed by the Serb’s player council over a crucial issue.

The player council, headed up by Djokovic, met to discuss the future of ATP chief Chris Kermode should he back board member Justin Gimelstob, who is facing aggravated assault charges in the US.

The vote was split 5-5 on Saturday, but Nadal, who supports Kermode, was unhappy that none of the council sought his opinion.

“Nobody from the council came to me and asked me my opinion,” Nadal said after a 6-4, 6-3, 7-5 victory over Australia’s James Duckworth.

“So I can’t have a real opinion on all of this because no one of my representatives came to me and asked me if I am happy with the president or not.

“[With] some crucial decisions like this, I don’t know, I understand that somebody from the council should come to me and ask my position.”

One of my greatest memories from the court featured this guy. @andymurray You are a true legend and it was an honour to share the court with you. Hope we will all see a strong last run from you 💪🏻

And so did Novak Djokovic

Tarbes, France 2001, “Les Petite As” First time we met and played. Something was telling me back then that we’d have an amazing rivalry and experience of playing each other on the biggest stage for many years to come. What you are trying to do is nothing short of brave and inspiring. I met with you the other day and couldn’t really verbalize my compassion for what you’re going through. As an athlete, fellow tennis player and friend, I respect and fully support you every second of this Australian Open and every next attempt to compete at the highest level. Whatever happens, I will always cherish our amazing matches over the years and be grateful for those experiences 🙏 Big hug Andy, stay strong. @andymurray

Eugenie Bouchard reminded us that she’s not entirely focused on tennis again, just more so than before.

The Australian Open is live on Eurosport with highlights being shown by the BBC.