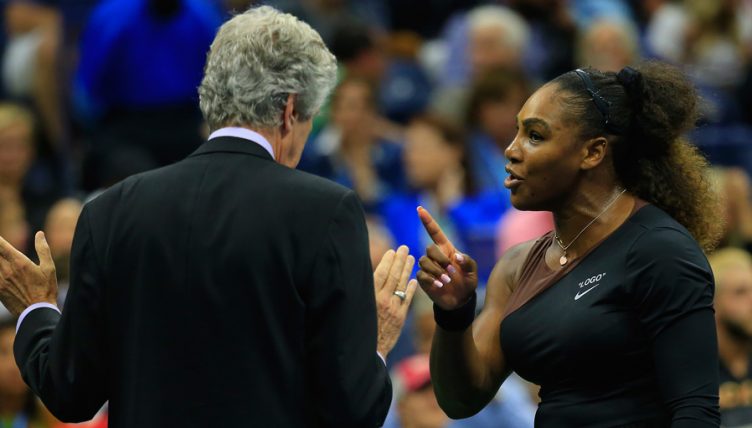 In Tennis Today, Serena Williams has been given both a telling off and understanding by a typically diplomatic Wimbledon chief.

What’s on the site
The Ryder Cup is upon us, so we will celebrate in appropriate fashion – by showing you videos of tennis players playing golf. You’re welcome.

Meanwhile, Andy Murray’s comeback is seriously gathering pace, with him pulling off a brilliant result in Shenzhen.

Roger Federer has an Olympics dream apparently, and the ITF has said they may let him bend the rules to live it.

Finally,we brought you an excellent little feature about a new tennis initiative designed to get children to take up the sport.

What’s in the news
There appears to be no let-up in the people queuing up to have their say on the Serena Williams US Open final fiasco.

This time, Wimbledon chief Philip Brook has waded into the debate, expressing understanding for Williams but admitting the scenes were ‘not a good look for tennis’.

“People said to me, would that happen at Wimbledon?” Brook told reporters, as quoted in the Telegraph. “My first reaction is maybe it could, but actually I do wonder [about] the uniqueness of the circumstances in New York.

“You have a very partisan crowd who really wanted Serena to win. There is a huge amount resting on this one match because she is one match away from equalling Margaret Court’s record [of 24 grand-slam titles].

“It is a bit cauldron-like. When they walk on court, it’s not like a Wimbledon final. The final of Wimbledon [where Williams had lost to Angelique Kerber eight weeks earlier] was similar in some senses but it wasn’t her home crowd in her home country.

“I could imagine the pressure on her being even greater than ever because of those circumstances, and we all saw what happened.

“I think she was under a lot of pressure, I think he [Ramos] was doing his job and what unfolded unfolded. It was not a good look for tennis.”

Thanks a lot to every single one of my followers ! 5⃣0⃣0⃣ ❤ Let‘s go for one million ! 💪👊 #500k #thanksalot #youarethebest #heretocreate #4ocean

There were plenty of birthday wishes for Simona Halep.

Number 1️⃣ of the World 🌎 & @rolandgarros Champion 🏆! This sounds familiar to us 😉. HAPPY BIRTHDAY @simonahalep! 😘😘 Have a nice day! 🎉🎂

The ATP seem understandably happy to have Andy Murray back.

The biggest win since his return from injury? @andymurray is through to the @atpshenzhenopen quarter-final, knocking out defending champ David Goffin 👏 . . #Tennis #AndyMurray #Murray #ATPWorldTour #Shenzhen #China