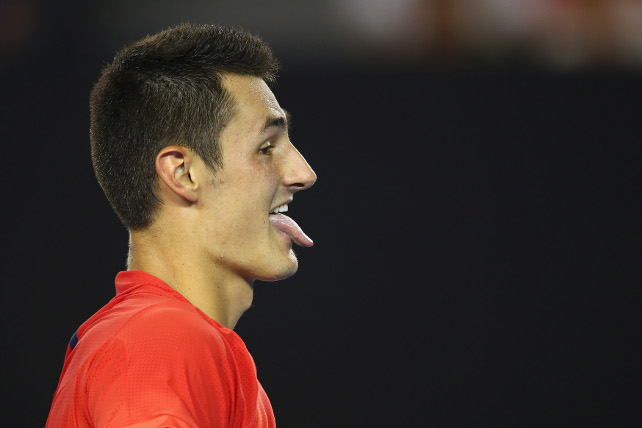 In Tennis Today, Bernard Tomic is “buying everything on the Gold Coast” and Judy Murray urges Serena Williams to fight for change.

What’s on the site
Tweeners, don’t you just love ‘em! On the back of Naomi Osaka’s tweener request, we came up with a few compilations.

Vince Spadea is a man of many talents. Not only was he a good tennis player, he’s co-written a book, he’s done some coaching and was a stunt double on Battle Of The Sexes. Oh and he raps as well.

It will be another quality field at Queen’s Club this year with Grigor Dimitrov and Marin Cilic the latest to sign up.

Then there is Rafael Nadal. Don’t expect to see him back on court before the clay-court season.

Maria Sharapova and Eugenie Bouchard were the big casualties on day one in Indian Wells Masters.

What’s in the news
It’s been a while, but Bernard Tomic is back in the news.

His entourage has been accused of spiking a woman’s drink at a nightclub on Sunday. The Gold Coast Bulletin reports that Tomic has broken his silence and claimed: “I just made a million dollars for four days on I’m a Celebrity, Get Me Out of Here. I just bought another house. I’m buying everything on the Gold Coast.”

The story is under subscription, but the Daily Mail has the quotes.

Judy Murray is calling on Serena Williams and other top players to push for change in the women’s game.

“Serena, now that she’s had a baby girl, I’m hoping as she comes towards the end of her career that she will use her voice to make things change for women,” she told The Scotsman.

Meanwhile, Juan Martin del Potro has bemoaned yet another tough draw at the Indian Wells Masters.

“Always. It doesn’t change. I don’t look too much, but I always know I’m in the worst part of the draw.”

The Argentine could face Novak Djokovic in round four, Marin Cilic in the quarters, Alexander Zverev in the semis and Roger Federer in the final.

What’s on social media
Just a casual tweener from Roger Federer during practice.

Daria Gavrilova has set someone straight on Twitter after she was accused of “a swipe to the crowd”.

Here we go is what I yelled..

Had a great time cooking with chef Jose Garces on Monday night at #cititasteoftennis! @tasteoftennis

Serena is all set for her comeback and she has launched the “Serena Gold toned ‘S’ pin” with funds raised through it going to charity.

It’s official. My comeback is here. This Thursday I will start playing tennis again professionally for the first time since giving birth to my daughter. This whole month I am playing tournaments in California and Florida- both my home states. Thursday, the day I play my very first match, marks international women’s day. My comeback could not have come on a better day and I decided I wanted to do something different let you all be apart of my long journey back (if you want of course!!) So I created my Serena Gold toned “S” pin. When I am playing you can wear it and show support not only from me but also for my charity which supports the Yetunde Price Resource center. I want this gold “S” mean something special to you personally. What is one S word in your life that means something to you? Mine is Strong and Sure! So when I wear my “S” pin I am representing Strength, and Sureness. What would your “S” mean? They are for now only available for my fans that come see my at Indian wells, and Miami starting Wednesday as well as Thursday when I play!! Sooooo if you are watching me stop by the Serena booth to grab a “S” pin. Post pics of you wearing your “S” and tag me! Thanks for the support I look forward to seeing you out there!!

A great throwback of a match between Stefan Edberg and Aaron Krickstein at the 1988 US Open.

Late Night at the #USOpen:

Epic scenes during the Edberg/Krickstein match…