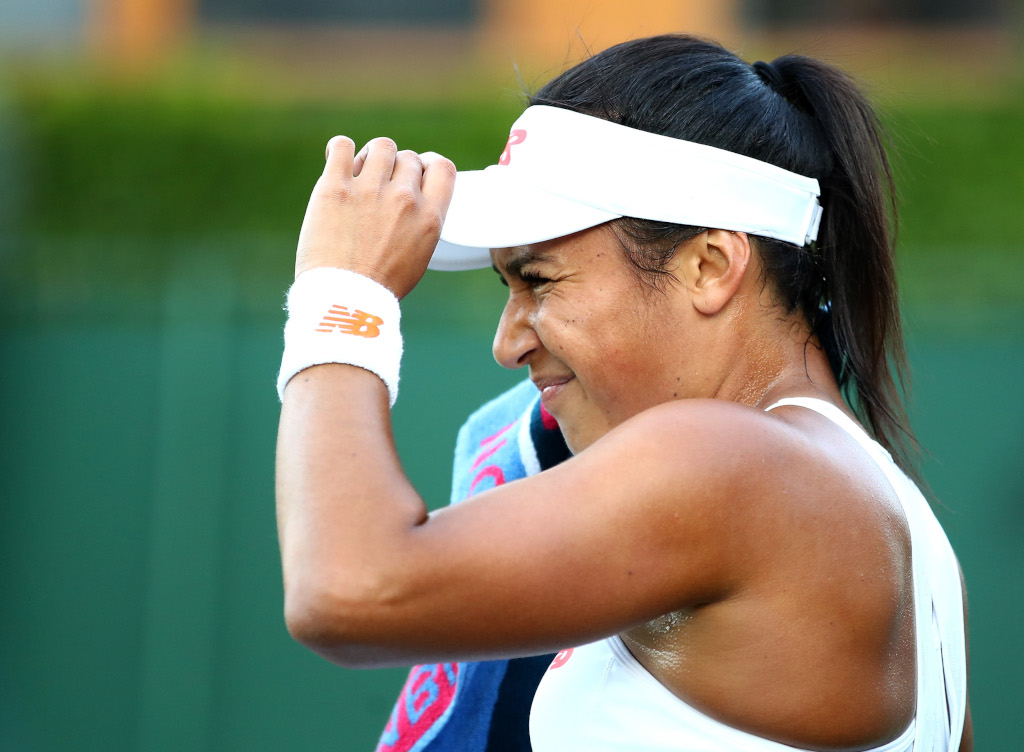 In Tennis Today, Andy Murray’s BBC debut was a hit with fans while Heather Watson hits out at “pathetic” umpiring.

What’s on the site
As per usual, we start with the Wimbledon order of play and it’s women’s semi-final day.

Now for the big news from SW19 on Wednesday where Kevin Anderson claimed the scalp of defending champion Roger Federer.

Then there was Rafael Nadal and Juan Martin del Potro serving up a classic.

When can we expect to see Andy Murray on court again? The former world No 1 has set a comeback date.

Caroline Wozniacki celebrated her birthday on Thursday and we our present was a Did you know? Ten facts about the huge Liverpool fan piece.

Who is more boring? Tim Henman or Andy Murray. The BBC was asked to do a poll.

Have you heard the one about the tennis player who missed Wimbledon because of an unread email?

Then there is the Gallery: The story from a dramatic day nine at Wimbledon.

And here is a bonus Gallery: Royals and celebrates out and about at Wimbledon 2018.

What’s in the news
On the back of Federer’s Wimbledon exit, Telegraph Sport’s Simon Briggs says his “sheen of invincibility is beginning to slip away”. (Premium content)

This was obviously written before the quarter-final, but Mats Wilander told Express Sport that Federer “will continue playing until he is 43 years old because of his latest Uniqlo deal”.

Murray made his debut as BBC Wimbledon commentator and Jan Moir says he “is an ace behind the mic” in the Daily Mail.

On the downside, he has a “flat McMonotone of someone taking details of your complaint in a call centre in Edinburgh”.

And then there was this, “Murray speaks as if a peg is clamped on his nose. Murrayspeak is all in the nostrils, with the underlying suggestion of vocal cords as thick as ropes, deep but with a pleasing huskiness”.

Heather Watson and Tatjana Maria were docked a point in the women’s doubles after a line judge reported the Brit to the umpire for “swearing”.

Watson claims she said “stupid”, but the line judge said she used the words “f****** stupid”.

“It’s literally like a snitch running to the front of the class saying, ‘I heard her say this!’. I think it is so stupid. It is. I can’t even explain,” Prestwichandwhitefieldguide.co.uk quotes her as saying.

Writing in The Independent, legendary tennis coach Nick Bollettieri says the “cream will rise to the top” and “Serena Williams and Angelique Kerber will make it to Saturday’s final”.l

If you checked out our galleries, then you will know Camilla, Duchess of Cornwall, was at Wimbledon on Wednesday.

Express Sport is also fascinated by the beard touching.

Oh and Romeo Beckham “was the spitting image of his mother ‘Posh Spice’ Victoria in a hilarious throwback picture when he attended Wimbledon”, says the Daily Mail.

We promise, it’s not hilarious and not even that similar.

What’s on social media
Quite the day at Wimbledon.

Today’s Hot Shots will live long in the memory…#Wimbledon pic.twitter.com/jz85Oxj16T

A hug to end a brilliant match.

Respect, above all else. 👏 . One of the great final sets – according to @andymurray in the commentary booth – caps an almighty battle between Nadal and Del Potro on Centre Court . #Wimbledon @rafaelnadal @delpotrojuan #TakeOnHistory

Nick Kyrgios is never afraid to share his opinion.

Im not entirely sure heather and I get the same treatment champ lol https://t.co/2swxWzqdev