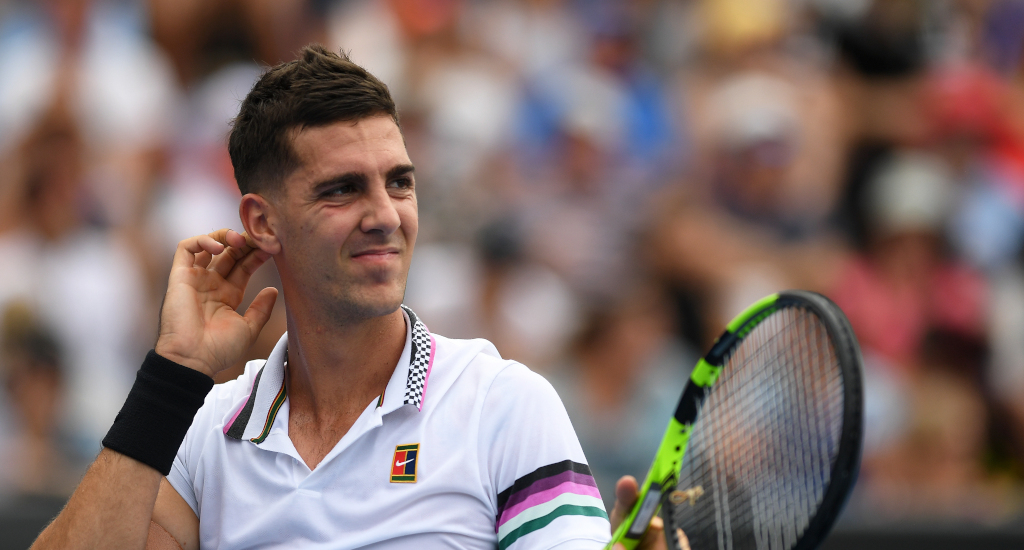 In Tennis Today, Greg Rusedski plays Nostradamus as he predicts how many majors Novak Djokovic, Rafael Nadal and Roger Federer will end up with, while Thanasi Kokkinakis is “filthy” (nope, we don’t mean dirty).

What’s on the site
Who is playing on day five at Flushing Meadows? Have a look at your US Open order of play.

But what actually happened on day four? Rafael Nadal, Nick Kyrgios and Daniil Medvedev all advanced.

On the women’s side, defending champion and world No 1 Naomi Osaka set up a mouthwatering clash with Coco Gauff.

How does Simona Halep feel after her exit? “I’m Wimbledon champion, so I will not ruin that,” says the Romanian.

Over in Mallorca, Andy Murray suffered a fitness scare during his Rafa Nadal Open exit, but don’t worry it’s not the hip.

What’s in the news
Amazon Prime pundit Greg Rusedski has played Nostradamus as he has predicted how many majors Novak Djokovic, Rafael Nadal and Roger Federer will end up with.

Metro.co.uk says Rusedski put Djokovic first, Nadal second and Federer third, but read for yourself how many Grand Slams each player will win according to the Brit.

Thanasi Kokkinakis admits he was “filthy” after being forced to pull out of US Open clash against Rafael Nadal. AAP, via 7news.com.au, has the story.

In case you were wondering, “filthy” is slang for angry in Australia.

He also adds: “I am p****d off and the worst part about it is walking down through the locker room. People see my head down and I haven’t even played the match.”

And there was also this: “Like Benjamin Button, I am hoping I (age) in reverse. That is what I am hoping for.”

Carla Suarez Navarro has been fined $40,000 for a lack of effort during her first-round exit from the US Open, reports The Associated Press.

The 28th seeded Spaniard retired with a lower-back injury, but tournament referee Soeren Friemel said Suarez Navarro “did not perform to the required professional standards”.

See, Bernard Tomic is not the only one copping fines for a lack of effort.

And now for your bizarre story of the day, “Jelena Djokovic to make cosmetics from her own BREAST MILK while husband Novak plays in US Open” reads The Sun headline.

We don’t know what to make of this.

Cannot describe how angry and frustrated I am right now. Having to pull out tonight after working so hard to get back to this point😞 I’m going to figure it out at some point and it will all be worth it…. Thankyou to everyone who still supports me through the shit. 🙏🏼🙏🏼🙏🏼

A 360 for the win 🌀. A jumping passing shot🕴. Gaël Monfils had some fun in his R2 win against Marius Copil.

Recycling is easy, but I think we should get some extra points for creativity 💁🏽♀️♻️ #flipitforgood @evianwater — Proud to help support the @usopen maintain their zero landfill status by making sure to #flipitforgood and recycle on site 😊