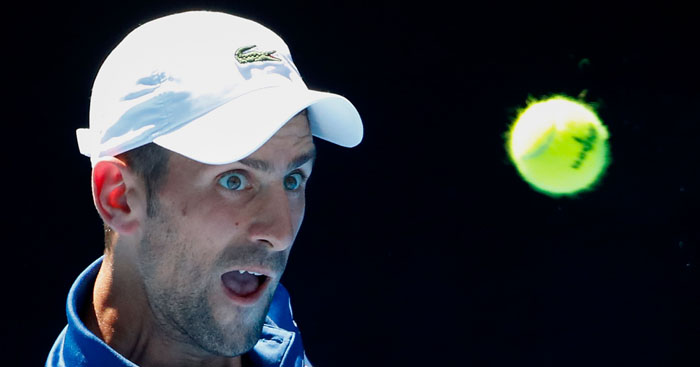 In Tennis Today, Novak Djokovic has managed to both impress and annoy two legends with one set of sentiments. Fair play.

For those of you who love joy, part two of Kevin Palmer’s exclusive Tennis365 interview with Boris Becker is available now. Want to know his thoughts on just how Andy Murray compares to the greats? Of course you do, so what are you waiting for?

The Australian heat is dominating the headlines elsewhere, and with on-court temperatures approaching 40’C you can kind of forgive people for mentioning it.

Djokovic defeated a heat-exhausted Gael Monfils on Thursday in four sets, but he has denied that he actually requested a day-time game.

It looks unlikely, however, that the players can expect any relief from the Melbourne heat any time soon. Tournament director Craig Tiley has been discussing the issue and his philosophy on the matter is positively and delightfully Darwinian.

If you missed it too, we also have a a cool football/tennis crossover to wrap your eyes around. Ever wondered which teams – yes, plural – the top players support? Wonder no more.

On Thursday, Roger Federer was accused of sexism, and today it’s Djokovic who has been caught in the crosshairs. After the Serbian made a stand for more equal prize money distribution among lower-ranked players, Martina Navratilova has smacked his wrist for not fighting the gender pay-gap while he’s at it.

Federer, meanwhile, has hit the headlines again, as he came out and backed Djokovic’s beliefs that prize-money distribution ‘is not quite where it should be’.

One person probably feeling a little less good about her honest expressions of emotion, though, is CoCo Vandeweghe.

The Californian was dumped out of the Australian Open in straight sets by world number 51 Timea Babos, and didn’t take too kindly to it, releasing a string of expletives on-court directed at the Hungarian.

That has proven costly, though, with ESPN reporting she has been hit with a $10,000 fine for unsporting conduct – double what Borna Coric got for smashing his racket versus John Millman.

It wasn’t a good social media day for Daria Gavrilova, who took the decision to make her Instagram account private after receiving a flood of online abuse from people upset that her straight-sets defeat to Elise Mertens – in which she held a 5-0 first set lead – had cost them money.

She did, however, respond, explaining: “Thanks everyone who keeps supporting me and for all your sweet messages! And … shhh to all the betting people … I copped it hard last night. Only people I follow can comment on my posts now … so my family doesn’t see all the ‘love’ I get.” 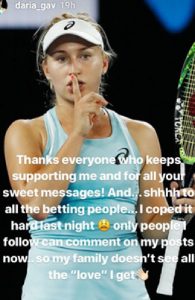 Elsewhere, Andy Murray took time to congratulate Kyle Edmund after he powered into the last 16 of the tournament.

Technically yesterday, but too late to make it into this section… TennisTV offered a great #TBT of Boris Becker doing Boris Becker things.

Top 🍌#TBT to this epic, banana-like forehand from @TheBorisBecker! Catch the full match in the “Classics” section on Tennis TV… pic.twitter.com/t8o0galdrE

15-year-old Marta Kostyuk, who became the youngest player since 1997 to reach the third round of a Grand Slam before being outclassed by compatriot Elina Svitolina, has certainly taken defeat in good spirits.

Guess what??? It turns out I can lose at AO after all😂 It was a great run and I’m looking forward to next year already💪🏻❤️