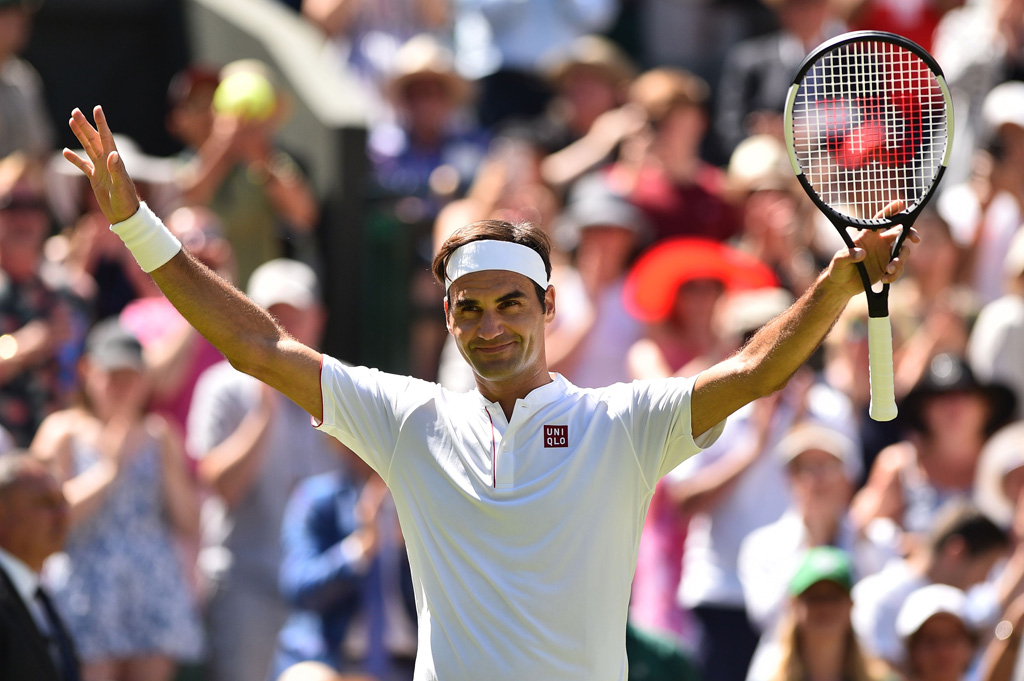 In Tennis Today, it’s about Wimbledon, Wimbledon and Wimbledon.

What’s on the site
Here’s your day two Wimbledon order of play with defending champion Garbine Muguruza and world No 1 Simona Halep headlining the women’s draw while Rafael Nadal, Novak Djokovic and Kyle Edmund will be in action in the men’s side.

Andy Murray won’t feature this year, but here is his reasoning behind his decision to withdraw.

Defending champion Roger Federer delivered the first shock at Wimbledon and it had nothing to do with the result.

Staying with Federer, he believes Murray’s Wimbledon withdrawal will aid his return to the top.

And here’s your gallery from an absorbing opening day.

What’s in the news
If you read Jordan Mortimer-Jones’ piece, you will know that Federer ditched Nike for Uniqlo.

Telegraph Sport has taken it a bit further as they suggest the decision to move to the Japanese manufacturer might have something to do with the 2020 Olympics.

“By hitching his colours to Uniqlo, a Japanese manufacturer, is targeting the Tokyo Olympics in 2020 as the stage for his departure.”

Boris Becker was part of the BBC’s Wimbledon coverage on Monday and of course the diplomatic immunity saga came up.

When Martina Navratilova joked that the German “just wanted diplomatic immunity so he didn’t have to wait in line at immigration!”

The Independent has the video.

“It was a good day for us at the office,” Wawrinka said.

Kevin Mitchell in The Guardian Andy Murray’s decision to withdraw from Wimbledon “may be flawed” as “competing with no expectations could have proved fruitful”.

Looks like we are set for the “hottest Wimbledon ever” and The Metro reports that “the Met Office reckons the 2018 championship will beat a record set in 1976 — when temperatures averaged 30.8C”.

The Daily Mail says temperatures peaked at 32 degrees Celsius on Monday, making it the “hottest day one in Wimbledon’s 141-year history”.

With Murray absent, The Sun gives “the lowdown on the next crop of UK tennis hopefuls”.

And of course they start with a picture of Katy Dunne in a bikini.

Rafael Nadal on Saturday questioned the long grass at Wimbledon, but an “insider” has hit back and denied the courts will be dangerous.

The “insider” that the Daily Star is talking about is Wimbledon head groundsman Neil Stubley.

What’s on social media
And in they come.

Day 1. In they come ??#Wimbledon pic.twitter.com/S6SQc9YUVZ

A little day one Wimbledon video from a fan.

Ask and you will receive.

I am excited to announce my new partnership with @uniqlo to commence the next chapter in my career. Nike has been a fantastic partner over the last 20 years which I will always cherish. I look forward to the new adventures coming ahead.

Serena Williams’ warm-up attire is something to admire.

For the first time since lifting the title in 2016, seven-time champion @serenawilliams returns to competitive action at #Wimbledon pic.twitter.com/zxXrPQGk5m

Katie Swann after her upset win over Irina-Camelia Begu at Wimbledon on day one.

Not Wimbledon related, but a compilation that brings a smile to the face from Tennis TV.