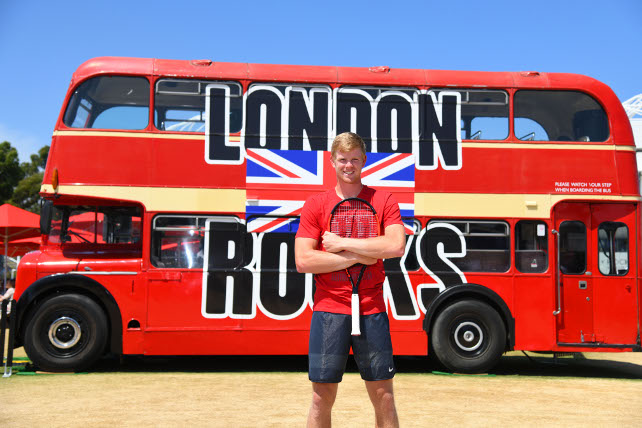 In Tennis Today, a “fascinating insight into what Roger Federer is really like” and the lowdown on Kyle Edmund and Alexis Sanchez’s earnings.

What’s on the site
The defending champion Roger Federer steamroller powered into the Australian Open quarter-finals for a record 14th time and 2016 women’s champion Angelique Kerber is also looking good as she beat Hsieh Su-wei.

Meanwhile, Novak Djokovic has played down concerns over his hip while Kyle Edmund believes he can win the Australian Open.

If you have a bit of time to spare, then do take our Australian Open quiz.

What’s in the news
Of course Kyle Edmund is the toast of Great Britain today after he reached the Australian Open quarter-finals for the first time. His coach Fredrik Rosengren explains in The Telegraph how he “has become one of hardest men to beat on tour”.

In case you were wondering the Daily Mail has four consecutive headlines on their tennis page mentioning Edmund, including how much money he’s guaranteed and how “Yorkshire steel and Swedish fire help the British No 2 into the last eight”.

The Daily Mail was only getting warmed up with their story on how much money Edmund is set to earn as they just had to get a dig in about footballers’ wages.

They’ve written a nice piece about ‘Kedders’, but then for some bizarre reason they throw in something about Alexis Sanchez’s life away from the football pitch and, naturally, they mention he will earn about £600,000 A WEEK!

The Sun has the latest on Grigor Dimitrov’s love life.

And now for something truly out of this world as the Express Sport has “fascinating insight into what Federer is really like” by asking a certified handwriting analyst.

We kid you not.

They have 17 paragraphs of quotes and the expert tells you everything from how Federer is a “fast-fluid thinker”, “highly confident in himself”, “a loner” and “may have some intermittent pain in his lower back area”.

What’s on social media
We always try to stay away from the cricket after The Ashes, but England are winning again so we don’t mind the odd pic now. Here’s Steven Smith and Roger Federer.

Sure there’s a few success stories to swap there…#AusOpen pic.twitter.com/DK0pVwdIaW

Then there is Boris Becker interviewing Gordon Ramsey.

What’s the #AusOpen equivalent of the @Wimbledon strawberries and cream?@TheBorisBecker asks @GordonRamsay for some inspiration pic.twitter.com/s0G1SFwpFG

Stepping away from the Australian Open, Milan Tyson – the daughter of Mike, yes that Mike – shows off her skills. We’ll refrain from boxing jokes.

Just like her dad @MikeTyson, #NetGeneration ambassador Milan Tyson has been developing her own knockout punch on the court with a lethal forehand! ????

While many players are taking in the sun in Australia after being knocked out of the Aussie Open, Gael Monfils is already back in the cold.

You can always count on the Bryan Brothers for a nice picture.

What’s on TV
Australian Open
The fourth-round action continues on Monday Dominic Thiem vs Tennys Sandgren and Novak Djokovic vs Hyeon Chung. While in the women’s draw, it is Barbora Strycova vs Karolina Pliskova.

On Tuesday it is quarter-final time and the two big matches feature Grigor Dimitrov vs Kyle Edmund and Rafael Nadal vs Marin Cilic. The women’s draw features Carla Suarez Navarro vs Caroline Wozniacki and Elise Mertens vs Elina Svitolina.