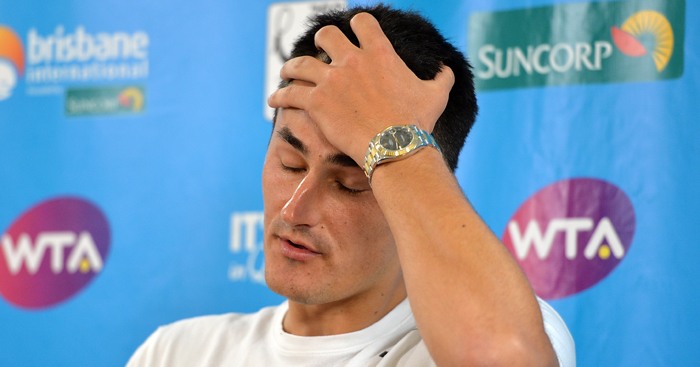 In Tennis Today, Bernard Toic is epicly trolled, for a change, and Boris Becker is still great to listen to.

Remember that time when footballing legend Paolo Maldini was a professional tennis player? What do you mean, ‘no’? No?! Well allow us to regale you with the tale.

We also have Stefan Edberg, with whom Roger Federer won no Grand Slams in two years under his tutelage as his coach, tell us how ‘irreplaceable’ and the Swiss ace’s brilliance actually is.

Sticking with Federer, the man he vanquished in the Australian Open, Marin Cilic, has quashed suggestions that the tournament organisers showed favouritism in the final.

Johanna Konta, meanwhile, is looking ahead, not back, and has announced her pre-Wimbledon grass-tastic schedule.

And, just for fun, because we are big fans of such things here on Tennis365, test your knowledge on Kyle Edmund by taking our quiz.

We love a bit of Boris here on Tennis365, Boris Becker, that is, obviously, and these quotes of his caught our eye.

He discusses the two great hopes of Australian tennis and urges them not to get disheartened, as Roger Federer can’t last forever.

While you’re on, why not check out our exclusive interview with Becker here.

Has Serena Williams, winner of seven Wimbledon titles, revealed her remaining ambitions with the All-England club? Two more titles  on her agenda?

Olympia Ohanian, at match point, championship point, even without her shoes she’s hard to beat. Serving now For her 12th Wimbledon title. 3 more than her mum Serena. @wilsontennis @olympiaohanian

Elsewhere, the US Open marked the start of Black History Month by sharing some words of wisdom fro the great Auther Ashe.

Wisdom ahead of his time…

As we begin our celebration of #BlackHistoryMonth, let’s revisit an inspiring exchange between Arthur Ashe and Bud Collins on the eve of Arthur’s historic US Open title in 1968.https://t.co/UxCSght1RF #USTAEmbraceALL pic.twitter.com/3hdPmgH2Iv