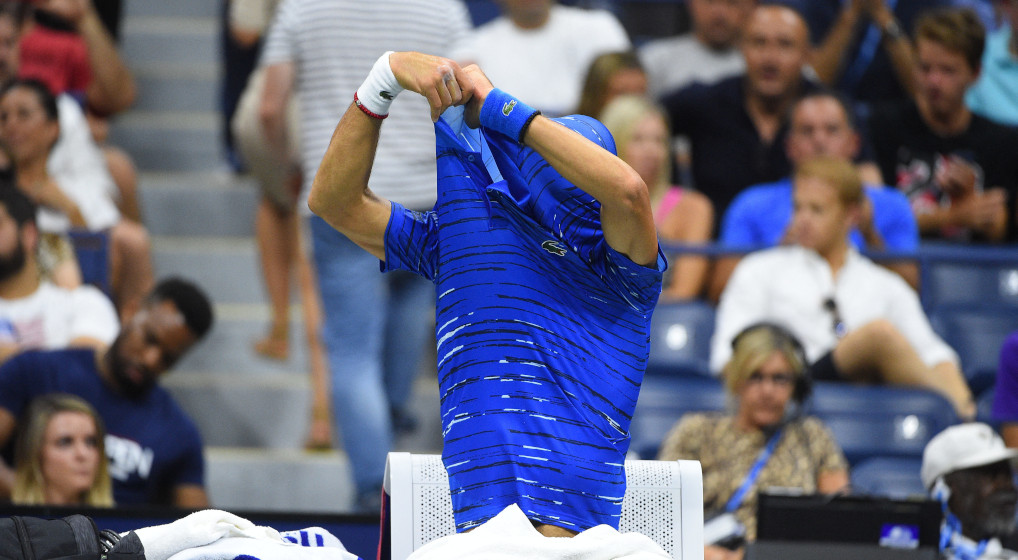 In Tennis Today, Novak Djokovic sets an “unwanted record” after retiring from the US Open clash, but Martina Navratilova has hit back at the crowd for booing the world No 1.

What’s on the site
This way for your US Open order of play for day nine at Flushing Meadows. It is quarter-final day so we there should be plenty of excitement.

Back to another day of upsets at Flushing Meadows and world No 1 and defending champion Naomi Osaka had “this feeling of sadness” after she was knocked out.

Alexander Zverev once again came up short as he lost to Diego Schwartzman and the sixth seed urged the Next Gen bad boys to be more like Roger Federer and Rafael Nadal.

Rafael Nadal did what he had to do to get the better of Marin Cilic, but the 18-time Grand Slam winner also came up with this beauty.

After the match Nadal was asked about having golfing great Tiger Woods supporting him.

Roger Federer to compete on the ATP Tour until he is 40? The 20-time Grand Slam winner says it is not impossible.

What’s in the news
“Rafael Nadal told to cancel wedding if he wins US Open because of Novak Djokovic,” is the headline on Express Sport, but we are not sure if that’s what Greg Rusedski meant.

Nadal is set to tie the knot on October 19 and has decided to play only two more tournaments before the year-end ATP Finals.

However, if the Spaniard wins the US Open it will put him in with a shout of finishing the year as the world No 1.

Amazon Prime pundit Rusedski said the following about Nadal: “He’s planning to only play two events before the end of the season because he’s going to get married.

“He might change that schedule if he wins this event.”

We are pretty sure he didn’t mean Nadal should cancel his wedding and was probably referring to changing his actual tennis schedule.

The Serb has now retired from all four Grand Slams.

Meanwhile, Martina Navratilova told the Tennis Channel, via Metro.co.uk, that the booing of Novak Djokovic is “just not on”.

“You know, tennis players 365 days in a year, you play maybe 70 matches so in 290 days you are preparing for those matches,” she said.

“So for people to question Novak Djokovic’s commitment to the game when he defaulted yesterday and booing him when he is walking off the court… that’s just not on.

“We need to really chill because we are professionals and we want to play. We don’t want to quit.”

Johanna Konta will take on Elina Svitolina for a place in the US Open quarter-final on Tuesday and Telegraph Sport has a nice piece about the British No 1’s coach Dimitri Zavialoff “helping her see tennis as fun”.

“It is more about playing than fighting,” he said. “When you are a kid, you play and you are happy when you win. To have a perspective, to make a distance with it, I think it helps.

“Sometimes the tendency to say ‘fight’ makes the enjoyment disappear in a way.”

What’s on social media
Of course Rafael Nadal and Tiger Woods hung out after the Spaniard’s match against Marin Cilic.

Always an inspiration for me. Thanks for coming today to the tennis, Tiger!!!! #vamos @usopen 💪🏻 #newyork

Gael Monfils was at his very best against Pablo Andújar.

Gaël Monfils was COOKING in his R4 win against Pablo Andújar. Swipe 👈 for some of the best moments…

A post from Naomi Osaka after her US Open exit.

If there’s one thing I know it’s that I’m stubborn. Fall on my face 18million times and I’m gonna get up 18million times 🤷🏽♀️ just wanted to say I’m probably gonna fall down a couple dozen times in the future but hey, the kid is resilient 😉❤️ love you NY see you next year! pic.twitter.com/Gb2l9G7JgY