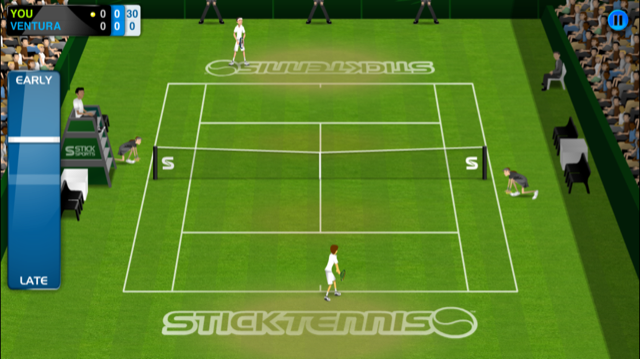 We know you already have Tennis365 bookmarked on smartphone home screen (right?), but that’s probably not enough for a tennis fanatic like yourself.

Since we don’t have an app (yeah we know, we know), we have made your life a little easier by compiling the top 10 must-have apps.

10. Stick Tennis
Do you have an hour or so to kill while waiting for a flight, or maybe you are just bored? Well, look no further than Stick Tennis as it is a nice time killer. Warning, it can get quite addictive. The other well-known game in this series is the popular Stick Cricket.

9. Ultimate Tennis
For those who are into their gaming, this one is definitely for you. It is one of the top-rated games with 10m plus downloads already.

The graphics are brilliant, you get different game modes, can build your own team and you can play against friends or challenge random players in real-time.

You can filter players by radius, skill level, age and gender.

7. Tennis Score Keeper
Another excellent app for us mere mortals who enjoy going to the court to play a game or two, whether it is just as a hobby, to keep fit or because you are an up-and-coming player.

Here you can monitor your own score and you also get statistics to help you improve your game.

If you are just interested in matches with statistics, then Tennis Score Keeper should be your go-to place.

6. Tennis Australia Technique (Paid)
Another one for those of us who play tennis and want to take things to the next level. This is a nifty tool for coaches, parents and players.

You can record games in HD, measure shots with the speedometer, manage files and analyse strokes with different tools.

5. Live Tennis Rankings / LTR
If you are interested in player rankings, then this one is for you as the app provides both ATP and WTA rankings projections for up to four weeks.

You can even filter it to national rankings and career high and new career high tracking.

4. My Roland-Garros spectator app
Unfortunately the French Open doesn’t have a worldwide app yet, but they do have a spectator one. In other words if you are at Roland Garros then it is quite cool as it has scores, highlights, news, maps and even allows you to pre-order your meal.

3. Australian Open / The Championships – Wimbledon / US Open Tennis Championships
What better way to keep up to date with the four Grand Slams than with their official apps?

Besides the usual news, scores, videos, draws, etc, you can also buy tickets through some of these apps or visit the official Online Shops.

2. Tennis TV
Yes, you can stream tennis games on the go thanks to Tennis TV – the ATP World Tour’s live video streaming app.

Every year they stream roughly 64 ATP tournaments and broadcast more than 2,000 matches. They can also cover up to eight courts simultaneously.

There is a catch, though, as it is a paid subscription service, but the FREEPLAY channel gives you free videos without the need to subscribe.

1. ATP/WTA Live
We all have days where we have to work or go out into the world and do things that normal people do. It means that we can’t sit in front of the television or a laptop to keep track of what’s going on in the world of tennis.

You get anything from live scores, order of play, draws, rankings and more.