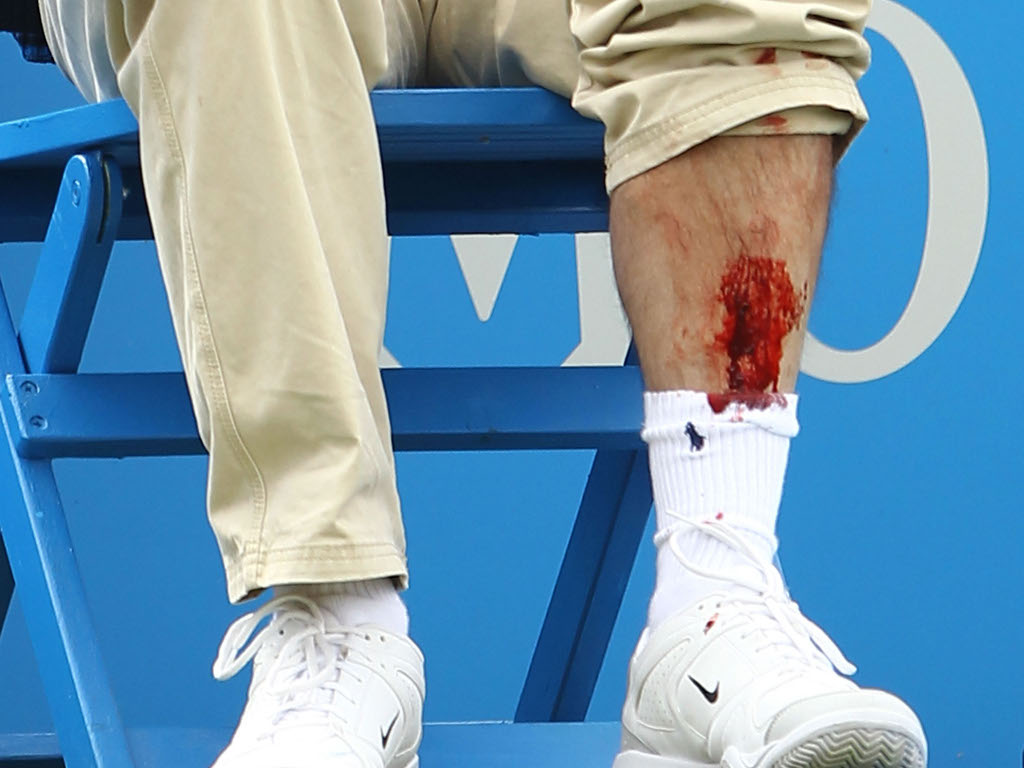 We all know that tennis and temper tantrums go hand in hand. As Karolina Pliskova showed, sometimes it’s got to all come out in an act of physical fury.

Tim Ellis looks at 10 other moments when tennis stars “hotel trashed” equipment, their opponent, the umpire or even themselves…

10. Koubek and Koellerer square up
In 2010, former top 20 star Stefan Koubek was disqualified after an on-court altercation at the national Austrian tennis league.

Koellerer knocked Koubek’s racket out of his hand, and the former Australian Open quarter-finalist grabbed him around the throat. He later blasted: “I’m man enough not to let myself be insulted, especially not by him.”

Koubek was immediately disqualified by referee Werner Hötzinger and the match was abandoned. The year after, Koellerer was banned for life for match-fixing. What a pair…

9. World Team Tennis goes all WWE
World Team Tennis is a mixed gender professional tennis league in the United States. On one occasion, in 2009, a 50-year-old John McEnroe was involved and he certainly didn’t disappoint in terms of play-acting.

When Leander Paes smashed a volley into Robert Kendrick, who was McEnroe’s doubles partner, it resulted in both team managers and Mac on the same side of the court, seemingly ready to hit it off. In a bad way.

Later, Kendrick smashed his serve way off target and straight at Paes, causing another managerial exchange of views.
“It was like a hockey game. The coaches were yelling at each other, the players were all shouting,” a source said. McEnroe admitted: “I think people come here expecting me to get angry and yell at someone.”

8. Broady gives Ostapenko a broadside
During the second-round match at the Auckland Classic in 2016, Naomi Broady took umbrage with Jelana Ostapenko’s behaviour: “It was quite clear that she threw her racket and it hit a ball kid, which should be disqualification,” Broady claimed in her post-match press conference. Ostapenko insisted “it slipped” from her hand.

The Brit went on to save two match points and win the match 4-6 7-6(4) 7-5, trading a few insults with her opponent at the net. As Judy Murray tweeted: “Don’t mess with a girl from Stockport.”

7. Martina Hingis’ in your face tactics
In the women’s doubles semi-final at Rio 2016, the Swiss Miss was down match point when she planted a forehand volley in the face of opponent Andrea Hlavackova. “It happens,” deadpanned the Czech player, who was left with a broken orbital bone.

When asked whether such a shot was fair play, Hlavackova made her feelings clear about the ruthlessness of her opponent: “When I saw the video and I saw the space which was around me, I have to admit that she could have put it away.”

6. Goran does not like to be beside the seaside
At the 2000 Samsung Open in Brighton, Goran Ivanisevic destroyed every racket in his bag during his match with Korean, Hyung-Taik Lee. Well, he only turned up with three Head Prestige rackets, (worth £179.99 each).

When he terminated them all, the Croat called for event supervisor Gerry Armstrong, telling him: “Gerry, I have no more rackets left.”

Armstrong announced to the bemused crowd that Ivanisevic could not carry on because of “lack of appropriate equipment.” Not to worry. Bad Goran turned to Good Goran the very next year to claim his precious Wimbledon title.

5. Baby Fed throws toys out of the pram when push comes to shove
In 2010, Grigor Dimitrov shoved an umpire with both hands after losing to Lithuanian Ricardas Berankis in the semi-finals of an ATP Challenger event in Helsinki.

The off-court assault resulted in a $3,100 fine for the then 19-year-old and a good ticking off from the president of the Finnish umpire’s association, Antti Aine, who witnessed the physical assault. “The immunity of the umpire is a sacred thing in sports,” Aine said. “You can disagree with calls but this was way out of line.

4. Mikhail Youzhny smashes his own head
At the 2008 Sony Ericsson Open in Miami, Mikhail Youzhny became so enraged after losing a critical point to Nicolas Almagro that he whacked his skull with the racket three times.

The Russian required medical attention when blood came pouring out of his volcanic Eastern European head. After a medical timeout, he proceeded to win the match in a third set tie-break. “It helped me so maybe I should have done it earlier. I just went a little bit crazy”, admitted ‘the Colonel.’

3. Denis Shapovalov eyeballs the umpire
Shapovalov was losing heavily to Kyle Edmund in the winner takes all fifth-rubber match of the Davis Cup World Group first-round tie in February 2017.

After going down a break in the third set, the temperamental Canadian plucked a ball from his pocket and smashed it with his racket in frustration.

Unfortunately, the flying missile hit umpire Arnaud Gabas of France directly in the face. Gabas had to receive courtside first aid and then eye surgery later on.

Under the rules of the ITF, Canada were disqualified, losing the match 3-2. Apparently, the Canadian and Frenchman are mates now. The 19-year-old said: “He is an extremely nice guy. He has really helped me get through it because he could have been mean about it – but he is a great gentleman, a great guy.”

2. Gentleman Tim gets Tarangoed
Partnering Jeremy Bates in the 1995 Wimbledon doubles against Jeff Tarango and Henrik Holm, Tim Henman missed a net cord return and smashed a ball into the ear of a ball girl in close proximity.

Henman said: “I was not happy at losing the point and was angry. I went to hit the ball hard. I’d looked to see if the linespeople were out of the way.” Tarango threw in his two dollars’ worth, suggesting the tearful girl could have been killed. Henman replied stoically: “I disagree with that.” 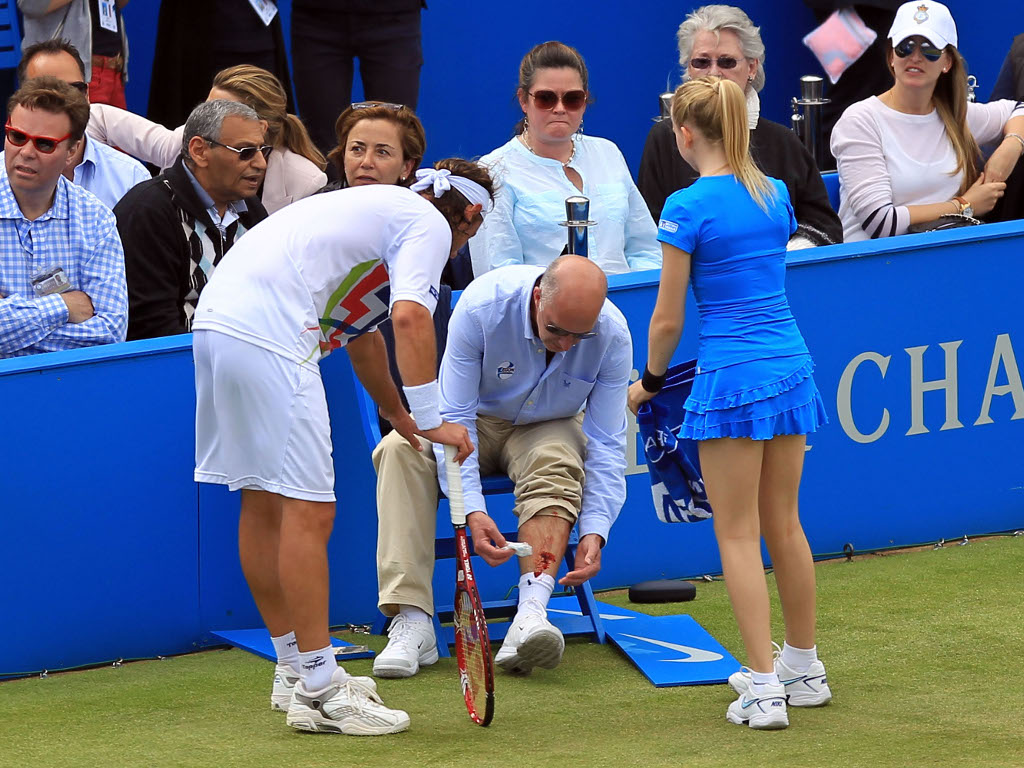 Much to the annoyance of a final day crowd, chair umpire Fergus Murphy awarded Cilic the match in line with ATP rules. Nalbandian apologised but couldn’t resist another swipe, albeit verbal: “It’s a tough moment to end a final like that but sometimes we feel so much pressure from the ATP playing so many tournaments.”