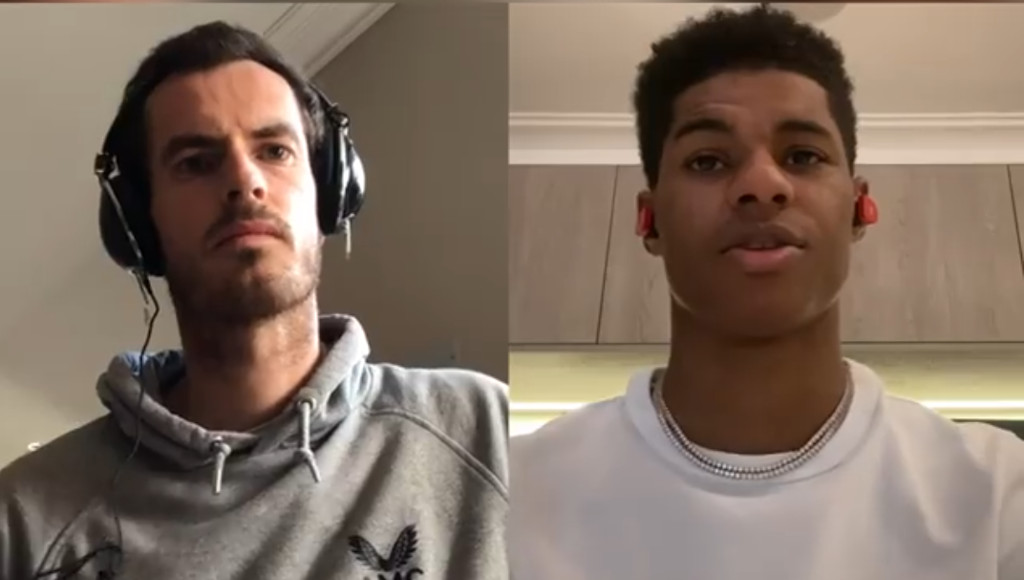 Andy Murray and Marcus Rashford have once again teamed up, this time to talk about their respective sports as well as their backing for women’s sport.

Last week three-time Grand Slam winner Murray and Manchester United forward Rashford surprised a nurse during an online chat and also took part in a quiz about each other’s careers.

But they were a lot more serious during their latest video ATP Tour meet-up as they discussed the mental pressures of their respective sports.

“One of the nice things about an individual sport that the outcome of the match is solely reliant on you,” two-time Wimbledon champion Murray said about the individuality of tennis.

“If you go out and have a great performance, the chances are that you win. Whereas in a team sport you might play badly, and the rest of your team plays great and you still win.

He added: “When I played team sports at school growing up like playing football with my friends, I did love that. I still love the team competitions in tennis,.

“It is quite different [as an individual] because the losses that you have are maybe tougher as you don’t have really a group of people around you that are dealing with the same thing.

“Sometimes tennis can feel a little bit lonely, you’re travelling, and you might be playing in Australia and all your family is back home. So, it’s not like when you lose a tough match, you then come in with your family or anything.”

Footballer Rashford, meanwhile, highlighted that the only time a football player really faces individual pressure is when they line up to take a penalty.

“I think the moment of a penalty is the one time where a footballer’s mindset is in the similar mindset to what you just spoke about,” he said. “It’s just you against the keeper, and if you take a good penalty, you’re going to score and ultimately win the game for your team.

“With tennis, you’re doing that all the time against one opponent. I’d probably say you’re in more of a rhythm of doing that, so I’d probably say the penalty is more difficult, purely because there aren’t that many of them that come about in games.”

The two also discussed women’s sport and Rashford expressed his hope that the sport will continue to rise.

“Growing up I used to play a lot of street football, there used to be 15/20 of us that would go, and other than me, the other best player was a girl called Jodie,” the footballer said.

“She used to play every type of street football that we used to do so I’ve always been interested in watching that and trying to follow people’s journeys. I think it’s important that it [women’s football] keeps trying to rise and more people should watch it.”

Murray has always been a champion for equality in not only tennis, but all sport, and the former world No 1 admits tennis is slightly ahead in terms of gender equality.

“I think that in tennis we’re pretty lucky,” he said.

“Men and women are competing in the same venues all of the time and at the biggest events. I think that’s one of the things that makes us unique and special as a sport.

“We’ve got the men and women competing on the same courts, at the same tournaments, for the same prize money and I think that’s quite attractive for fans of tennis.

He continued: “I think in football it is certainly improving as well.

“There is a lot more visibility around the women’s game and I know the World Cup was great for that. Some of the viewing figures for the England games were brilliant and hopefully it keeps pushing forward.”