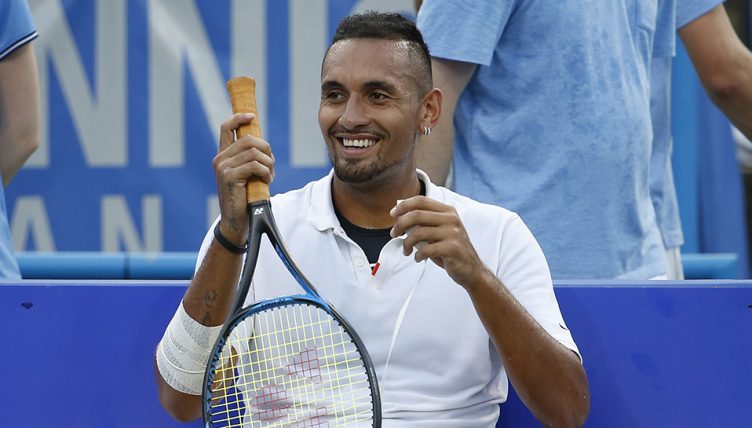 Nick Kyrgios is surely facing yet more disciplinary action after he hurled a foul-mouthed rant at umpire Fergus Murphy in Cincinnati.

The Australian was playing Russian Karen Khachanov and started quite well by taking the first set.

“The worst f***ing ref ever, the worst ref in the game,” Kyrgios told Murphy after the match.

“The worst, hands down. Every time I play he’s doing some stupid sh*t, every time.”

At the end of the match Kyrgios unleashed on Murphy again, saying: “You’re a f***ing tool bro.”

WATCH: Even for Nick Kyrgios, this outburst at the Cincinnati Open was BIZARRE – the Australian took a timeout to break two racquets during a furious tirade at the umpire. #9News

Earlier in the match Kyrgios caused confusion, as well as a little amusement, when he left the court with two rackets and smashed them in the corridor before returning.

It was an apparent attempt, an unsuccessful one, to avoid a point penalty for smashing them on court.

The pair also clashed over shot-clock, which Kyrgios thought was being used to strictly against him, with him using Rafael Nadal as a comparison, claiming the Spaniard is exempt from the rule.

Kyrgios certainly has history with Murphy. They clashed at Queen’s earlier this summer – resulting in a £13,766 fine – and again at the Citi Open in Washington last week.