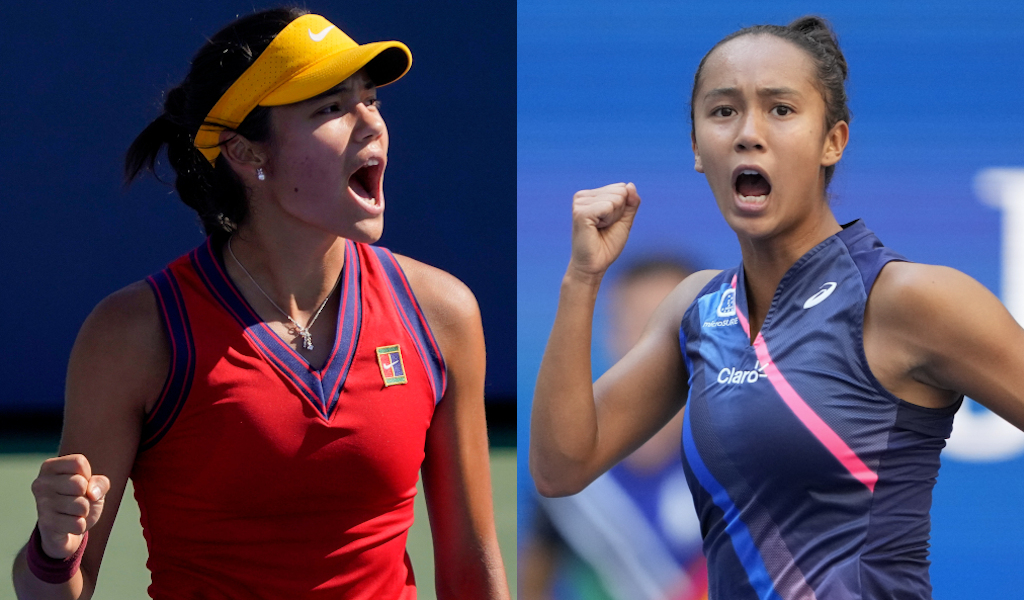 No one would have predicted an Emma Raducanu vs Leylah Fernandez US Open final at the start of the tournament, but Flushing Meadows will have a fairytale conclusion thanks to the two rampaging teenagers.

It will be the first Grand Slam final between teens since Serena Williams and Martina Hingis took on each other at the 1999 US Open – both Raducanu and Fernandez were not born.

Only one, though, will hold the US Open trophy aloft on Arthur Ashe Stadium come Saturday evening. Will it be Great Britain’s Raducanu or will it be Fernandez from Canada?

The 18-year-old has already set a few records as she is the first qualifier – man or woman – to reach a Grand Slam final while she is hoping to become the first British woman to reach a major final since Virginia Wade won Wimbledon in 1977.

The US Open final will be Raducanu’s first top-level final.

Fernandez, who celebrated her 19th birthday on September 6, is looking to become the second Canadian after Bianca Andreescu (who won the US Open title in 2019) to win a Grand Slam.

The US Open final will be the 19-year-old’s third top-level final as she finished runner-up at the 2020 Mexican Open while she won her only title to date at the Monterrey Open in February 2021.

Emma Raducanu is yet to drop a set the 2021 US Open and that includes qualifying. The 18-year-old beat Stefanie Voegele, Zhang Shuai, Sara Sorribes Tormo, Shelby Rogers, Belinda Bencic and Maria Sakkari in straight sets en route to the final.

Before the US Open she reached the final of the Challenger event in Chicago, finishing runner-up to Clara Tauson while other top-level matches were a first-round defeat at the Silicon Valley Classic and, of course, a run to the fourth round at Wimbledon.

Leylah Fernandez’s US Open form has been nothing short of amazing when you take into account the players she has taken out. She came from a set down to beat defending champion Naomi Osaka in the third round, three-time major winner Angelique Kerber was beaten in the fourth round, fifth seed Elina Svitolina was taken out in the quarter-final and world No 2 Aryna Sabalenka was sent packing in the semi-final.

What makes the Canadian’s Flushing Meadows run even more impressive is the fact that she lost her opening round matches in the main draws at Wimbledon, Montreal and Cincinnati.

Saturday’s US Open final will be their first top-level meeting, but they did face each other in the 2018 Wimbledon Girls’ Singles event with Raducanu upsetting the 11th-seeded Fernandez 6-2, 6-4 in the second round.

“A surprise. Yeah, honestly I just can’t believe it. A shock. Crazy. All of the above.

“But, yeah, it means a lot to be here in this situation. I wanted obviously to, like, be playing Grand Slams, but I didn’t know how soon that would be. To be in a Grand Slam final at this stage of my career, yeah, I have no words.” – Emma Raducanu

“I think I’ve been doing some things incredible. I don’t know. It’s like I think one word that really stuck to me is ‘magical’ because not only is my run really good but also the way I’m playing right now.

“I’m just having fun, I’m trying to produce something for the crowd to enjoy. I’m glad that whatever I’m doing on court, the fans are loving it and I’m loving it, too. We’ll say it’s magical (smiling).” – Leylah Fernandez

This is an incredibly difficult final to call as on the one hand you have an 18-year-old who has breezed through qualifying and the main draw to reach a maiden Grand Slam final in only her fourth top-level tournament.

On the other side of a net is a 19-year-old who has taken out four high-quality opponents in Naomi Osaka, Angelique Kerber, Elina Svitolina and Aryna Sabalenka. And she went the distance in all four of those matches.

Often these matches are decided by momentum, but both players are on a roll. Then there is the case of who will start better, but again both have overcome poor starts this tournaments as Raducanu was broken early by Rogers and Bencic, but then steamrolled both. Fernandez, meanwhile, lost the opening sets against Osaka and Svitolina and turned things around.

They have both been fearless so far, but perhaps this one will be settled by nerves as the pressure in a Grand Slam final is quite different.

Raducanu just seems to have that extra bit of composure so we think she will just edge it, but then again the way the women’s draw has gone, what do we know?