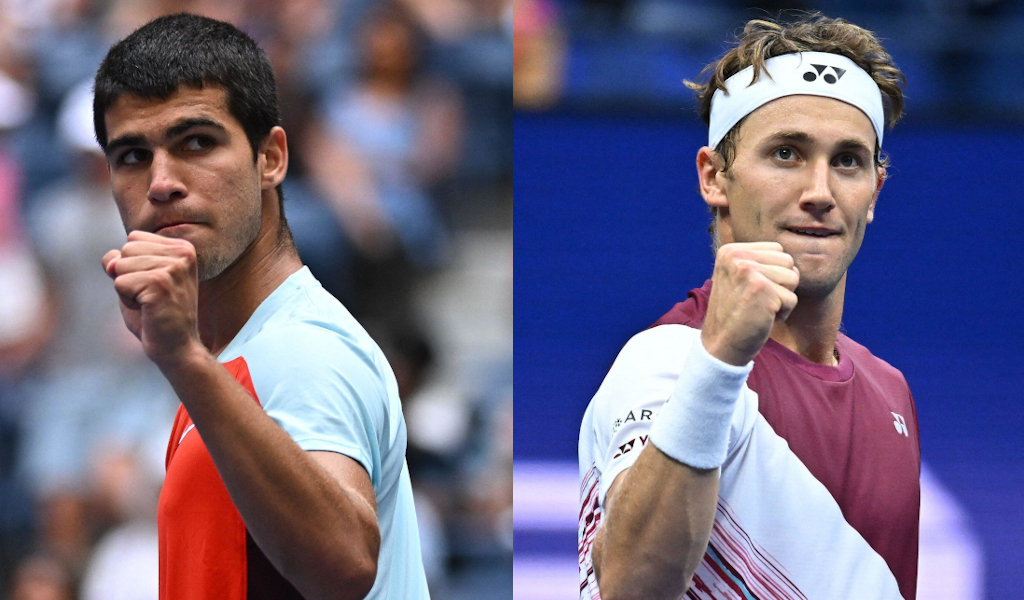 A new king will be crowned at the US Open on Sunday as the two finalists will battle it out not only for the Flushing Meadows trophy, but also the No 1 spot in the ATP Rankings. Carlos Alcaraz vs Casper Ruud is sure to be an entertaining affair on Arthur Ashe Stadium.

The new generation is finally delivering as they prove they are ready to take over from the Big Three of Rafael Nadal, Novak Djokovic and Roger Federer as three of the four players in the semi-finals were under the age of 25.

Although Ruud heads into Sunday’s with a bit more experience in Grand Slam finals, you can hardly call Alcaraz an inexperienced player as he has beaten all comers on the big stages this year – including the Norwegian.

But besides the US Open trophy and world No 1 ranking, Alcaraz will be bidding to become the seventh youngest player to win a Grand Slam while Ruud is out to become the first Norwegian man to lift a major.

What’s at stake in the #USOpen final?

A first Grand Slam title and the No. 1 ranking in the world. Otherwise, not much. pic.twitter.com/p019nfg2cU

Carlos Alcaraz’s path to the US Open final

Alcaraz has had an energy sapping two weeks at Flushing Meadows as he has played three consecutive five setters. He started the tournament with three comfortable wins over Sebastian Baez, Federico Coria and Jenson Brooksby.

Casper Ruud’s path to the US Open final

But that’s not to say he didn’t have to work his way to the final as after beating Kyle Edmund in straight sets in his opener, he needed four sets to see off Tim van Rijthoven, five sets to beat Paul and another four sets to get the better of Corentin Moutet.

Casper Ruud’s star on the rise, but admits Erling Haaland is ‘biggest star we have in Norway’

He was ruthless against 13th seed Matteo Berrettini in the quarter-final as he won in three before three-hour tussle against Karen Khachanov in the semi-final.

Alcaraz has always been there or thereabouts as he reached the quarter-final in Cincinnati, lost early in Canada, finished runner-up at the Croatia Open and German Open.

He was beaten in the round of 16 by Jannik Sinner at Wimbledon and lost in the quarter-final of the French Open. Of course before that he won titles in Madrid, Barcelona, Miami and Rio.

Although he started his US Open campaign on the back of an early loss at the Cincinnati Masters, Ruud has been a model of consistency during the 2022 season. Before that he reached the semi-final of the Canadian Open, won the Swiss Open, lost early in Sweden, at Wimbledon and at Queen’s Club.

He enjoyed a dream clay-court season as he finished runner-up to Rafael Nadal at Roland Garros, won the Geneva Open and was a semi-finalist at Italian Open.

They have played each other twice and Alcaraz has won both encounters with the first a 6-2, 6-4 victory on the clay in Marbella, Spain, in 2021.

He also did the business on a hard-court earlier in 2022 as he beat the Norwegian 7-5, 6-4 in the Miami Open final to secure his maiden ATP Masters 1000 title.

“After Roland Garros, I was extremely happy but at the same time humble enough to think that could be my only final in a Grand Slam in my career. They don’t come easy. So here I am a couple of months later – it feels beyond words to describe. Of course there will be nerves and we will both feel it. I hope it will be a good match. He has beaten me a couple of times and I will seek my revenge.” – Casper Ruud

Carlos Alcaraz started the tournament as one of the favourite as he just has things going for him and he will no doubt also be the favourite when the chair umpire calls “let’s play” on Sunday.

However, he has clocked more than 20 hours on court so far so will need every bit of the exuberance of youth to get him through one last match at Flushing Meadows.

Even though Ruud was seeded fifth and reached the final at Roland Garros earlier this year, many put him down as a clay-court specialist as eight of his nine ATP Tour singles titles have come on the red dirt. But he does have a title on the hard courts as he won the San Diego Open in 2021 while also finished runner-up to Alcaraz in Miami earlier this year.

If you had to put money on it, then you’d back Alcaraz as he seems to be able to get himself out of any tight spot as he has that ability to wear his opponent down.