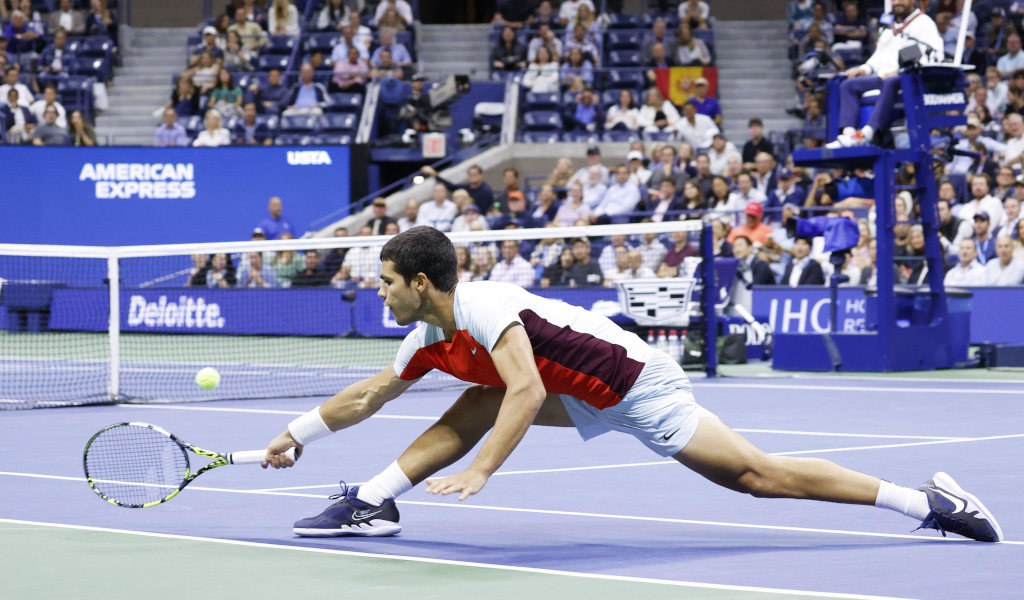 Carlos Alcaraz won a spellbinding battle of the young guns against Jannik Sinner to reach his first grand slam semi-final in the US Open’s latest ever finish.

Remarkably, three matches had previously finished at 2.26am, while this was the second time Alcaraz had played beyond 2am in succession after his fourth-round win over Marin Cilic finished at 2.23am.

WHAT DID WE JUST WATCH?!?! 🤯@carlosalcaraz wins a mind-blowing FIVE-HOUR THRILLER over Sinner to reach the #USOpen semis for the first time!! pic.twitter.com/v0E83cNG0u

The 19-year-old saved a match point in the fourth set and came from a break down in the decider against his 21-year-old opponent to show once again what a special talent he is.

He could yet leave New York as the world number one but, in a tournament that appears to have finally signalled a real changing of the guard, this match was more than anything a demonstration that men’s tennis need not be scared of a future without its aging superstars.

The fans that remained until the end cheered loudly for Alcaraz, and he said: “Honestly I still don’t know how I did it. The level of the match, high quality of tennis.

“It’s unbelievable the match today. Jannik Sinner is a great player. I will never be tired to say that all the wins I have in this amazing court is thanks to the support I receive.

“I just believed in myself, believed in my game. I knew to close a match is really difficult, I have to stay in the match, try to stay calm.”

Sinner’s spell as the brightest young talent in tennis was swiftly cut short by the emergence of Alcaraz, who swept past his rival and into the top 10.

But the Italian had come out on top in their two recent meetings, in the fourth round at Wimbledon and then at the ATP tournament in Umag, Croatia.

Sinner made a nervous start, double-faulting three times in his opening service game, and, although he quickly broke back, Alcaraz was hitting his shots with the greater conviction and deservedly took the first set.

The second was arguably the best of the tournament so far. This time it was Sinner who moved into an early lead, his flat hitting giving him the initiative, and he maintained his advantage until he came to serve for it at 5-4, when Alcaraz broke back.

The Spaniard looked poised to take the set when he moved to 0-40 in Sinner’s next service game only for the Italian to produce some clutch serving when he needed it most.

The Frances Tiafoe show continues as he takes out Andrey Rublev: ‘Let’s enjoy this one, we’ve got two more’

With Sinner at game point to force a tie-break and after another excellent serve, Alcaraz pulled off the shot of the tournament, wrapping his racket around his back to send the ball flying low over the net and then passing his opponent with a winner.

The fans in Arthur Ashe could not believe what they had witnessed but Alcaraz then dumped a forehand into the net on set point as Sinner held on.

ALCARAZ BEHIND THE BACK WHAT?!!?!?! pic.twitter.com/ylewLwrqxu

Alcaraz had one more chance to take the set in the tie-break but Sinner saved it with an ace and then landed a backhand in the corner to level the contest.

If Alcaraz wondered how he had not taken the second set, the same was definitely true of the third, where he twice led by a break only for Sinner to produce near miracles with his back to the wall.

After breaking his opponent when he served for it at 6-5, Sinner won seven straight points to take the tie-break.

As the clocked ticked towards 2am, it was now Sinner in the ascendancy and he twice led by a break in the fourth set.

But this time it was Alcaraz stealing a set, saving a match point at 5-4 and winning the final four games to force a decider. There Sinner again struck first but Alcaraz piled on the pressure and clinched the win with an ace.