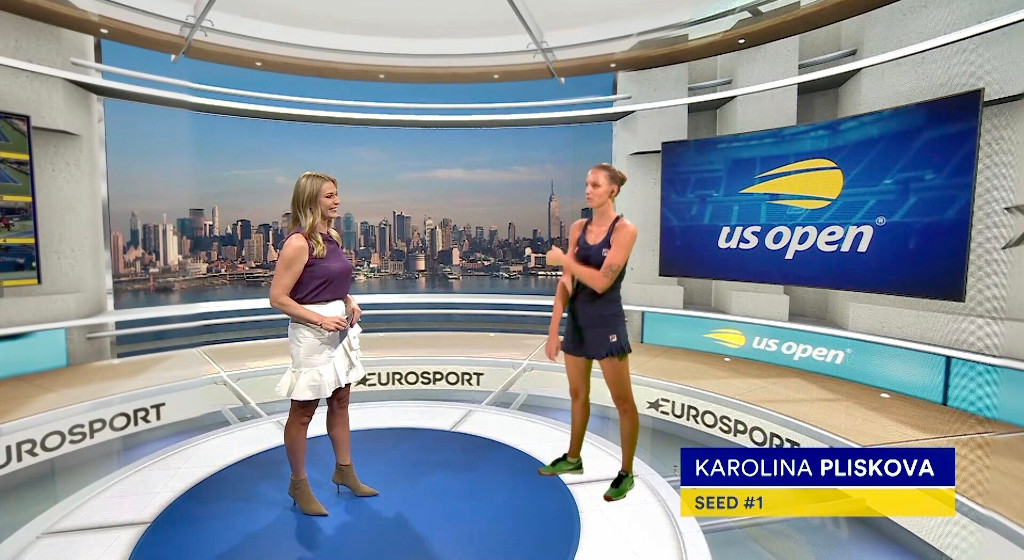 Broadcasters around the world are finding inventive ways of covering the US Open without being on-site at Flushing Meadow and Eurosport served up an ingenious way to bring post-match interviews to life.

With host Barbara Schett-Eagle unable to be in New York due to the Covid-19 restrictions, Eurosport displayed their augmented reality technology to beat top seed Karolina Pliskova after she won her first-round match against Anhelina Kalinina.

The magic of technology allowed viewers to see Schett-Eagle and Pliskova standing next to each other as they conducted their interview using a method that may well be the future of sports broadcasting long after the coronavirus crisis ends.

Eurosport today launched the new Cube for our coverage of the US Open and we were thrilled to welcome number one seed @KaPliskova as our first-ever guest in the mixed-reality studio with @Babsschett after her first round win. pic.twitter.com/MC5Wrk6g7i

What do you need to know about the Eurosport Cube?

What makes the Eurosport Cube unique?
• The Eurosport Cube brings together a variety of the latest technology for the first time, creating an interactive mixed-reality studio using augmented reality (AR) and enhanced graphics.

• With spectators outside the stadiums and experts required to be back home, the Cube uses this technology to transport fans into the heart of the action from New York.

• The Eurosport Cube will create a virtual world that remotely connects the players in New York with guests, hosts and experts from ANYWHERE in the world.

• The technology allows true interaction, while the players will appear physically in the Cube with a direct eye-line between guest and host.

• Eurosport’s Cube can be constructed in a day, aided by an innovative auto-calibration system which speeds up the lens and camera tracking setup

• It includes a sophisticated tracking solution which allows the lighting to automatically follow the presenters in the space, which enables presenters to interact with AR graphics or props

• It utilises an innovative “virtual set extension” to extend the content outside the footprint of the physical LED video environment, placing the presenter and camera in a fully immersive 360° digital environment

The US Open from Flushing Meadows in New York will be screened on Eurosport across Europe in over 50 countries and territories, except the United Kingdom and Ireland