EXCLUSIVE: US Open champion speaks to Tennis365 ahead of his title defence in New York 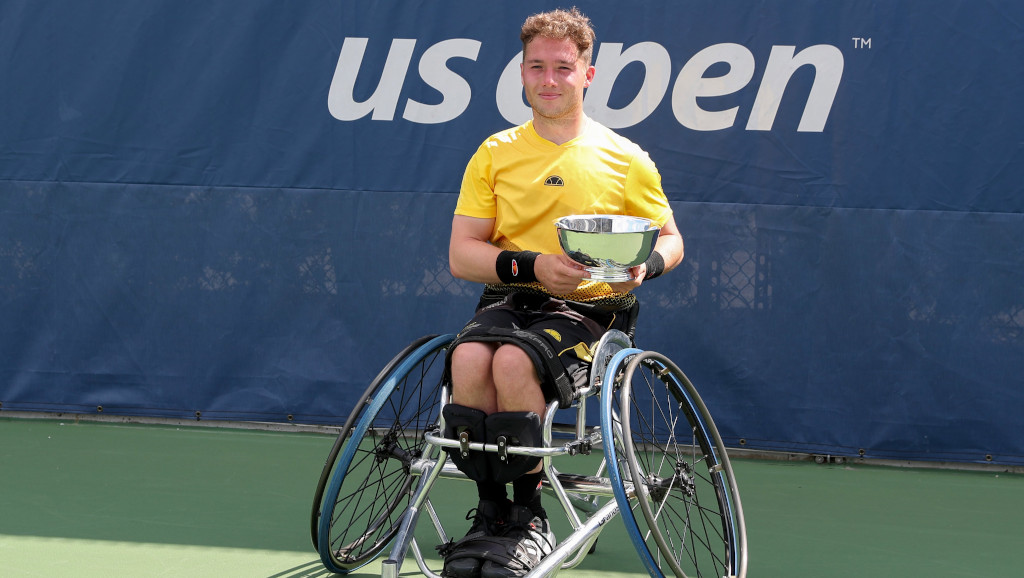 There was never any doubt that Alfie Hewett would board a plane to New York once the US Open belatedly added wheelchair tennis to their list of events for the 2020 event at Flushing Meadows, as this may be his final chance for glory at one of his favourite events.

At the age of 22, Hewett will look to make it three US Open singles titles in succession, with a black cloud hanging over him as changes to the regulations in his sport mean he may not be able to compete beyond this year.

Revisions to the wheelchair tennis classifications made by the International Tennis Federation and approved by the International Paralympic Committee last year resulted in Hewett being told that 2020 would be his last season in a sport that has shaped his life, leaving him to come to terms with a devastating verdict.

Hewett suffers from a hip condition called Perthes Disease and while he can walk for short distances, playing professional tennis would be impossible and that is why he has devoted his life to the wheelchair version of the sport, where he has excelled by winning three Grand Slam singles titles and a host of doubles triumphs in major tournaments with his partner Gordon Reid.

Was this the greatest wheelchair tennis rally ever?

The concentration, the athleticism, the endurance, the skill. @GordonReid91 and @alfiehewett6 set the court alight in Rio. 🔥

As Tennis365 caught up with Hewett at the Lawn Tennis Association’s National Tennis Centre in south London, it was clear that the prospect of what may be a final trip to the US Open was setting his pulse racing.

“I am buzzing to play out in New York again,” Hewett told us, as he prepares to defend his title. “My record at the US Open is good and I’ve never gone there and not made a final in my trips out there. Here’s hoping that continues this year.

“We have all been through a period where access to what we are used to has been restricted and it makes you appreciate what is special in your life.

“It feels like we are all living in a completely different world now and to get back out on court and to fly to New York to play in the US Open is something I feel ready for now. I’m excited about it.

“You feel like a new kid when you get out on the court after a few weeks being locked up at home and not going out too much. I didn’t get back out on court because I was desperate to compete, but more because I just missed it and that shows how much this sport means to me.

“I am concerned by the flight over to America, that’s the bit I’m not looking forward to because the virus is still on all our minds, but from what I’m hearing, the set-up over there is great and we should be fine once we get to New York.

“Now we are looking to get tennis back and I am not going to turn down the opportunity to play. I put my trust in the USTA to look after us.”

Reading that WC tennis isn’t planned for this years @usopen despite the event going ahead. Is it fair that able bodied mens and womens divisions (with restrictive draw sizes) get the opportunity to play and defend for a prestigious title…

US tennis chiefs initially suggested they would not have a wheelchair event in this year’s US Open, but a campaign by Hewett and his fellow players changed that stance and he hopes the event can add to the spectacle in New York.

“I said my bit on social media at the start when it was announced there would be a US Open without a wheelchair event and other players stated their belief that it was discrimination against our sport, but that might have been a bit harsh given everything the USTA were dealing with to get the US Open on at all,” he stated.

“Maybe we weren’t the primary objective on their agenda and that is disheartening, but we have to be realistic as well. We have so many great athletes in wheelchair tennis, yet we realise we are not Roger Federer or Rafael Nadal and the top able-bodied players will always take precedence.

“On the positive side and looking how far the sport has come, it is an absolute miracle for a Paralympic event to be included in the biggest tournaments in tennis every year. In fact, I would probably say wheelchair tennis is the more integrated with its abled bodies professional athletes than any other sport and we have to be grateful for that.”

Which is your favourite?

The LTA offered great support to the wheelchair athletes during the Covid-19 lockdown, with a tournament at their London HQ in the days before the British players headed to New York for the US Open welcomed by Hewett.

“The LTA have been great during this period,” he added. “I have been in regular touch with the coaching staff here and having a tournament arranged just before the US Open was vital for us. It gave the British players a chance to get a few games under their belt and that could be vital to us when we get out there.”