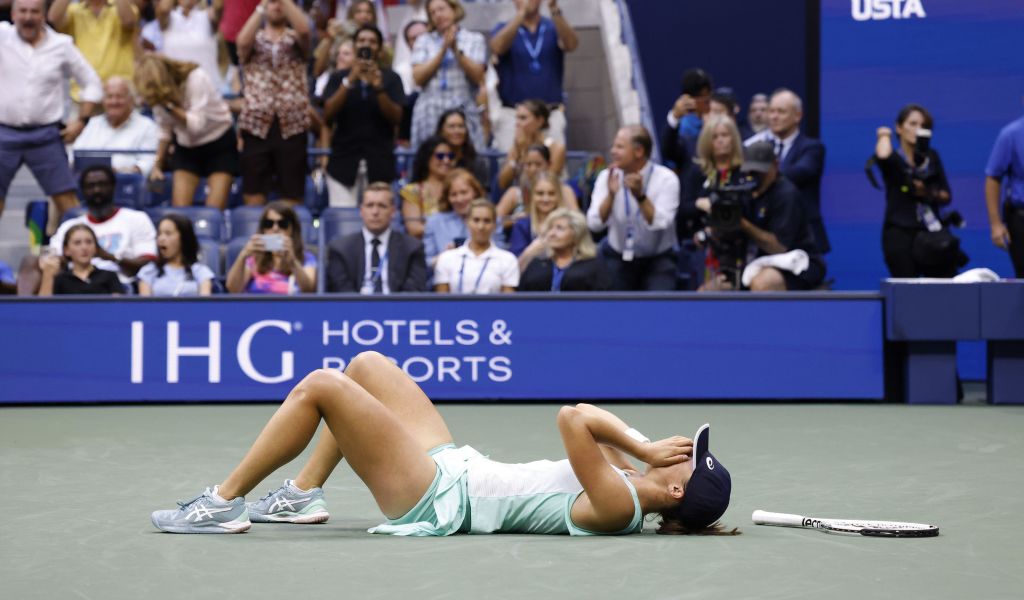 Iga Swiatek admitted she surprised herself by claiming her first US Open title with a straight sets win against Ons Jabuer in the final.

It appeared an early finish was on the cards when Swiatek moved into a 3-0 lead in the second set and had three chances to break Jabeur again, but the Tunisian held firm and, apparently distracted by shouts from the crowd, Swiatek played her first loose service game of the match.

Jabeur sensed an opportunity and suddenly Swiatek, who had been shaky on hard courts this summer, looked far from secure.

The Tunisian pulled back to 4-4 and then had three chances to break in the next game but Swiatek held on.

Jabeur then saved a match point at 5-6 to force a tie-break but was then faced with another and this time Swiatek converted to win 6-2 7-6 (5).

“I wasn’t expecting a lot,” said Swiatek, who appeared to be in poor form heading into the US Open and admitted she was not a fan of the balls being used in the final Grand Slam of the year.

“Before this tournament it was such a challenging time. Coming back after winning a Grand Slam is always tricky.

“For sure this tournament was really challenging because it’s New York, it’s so loud, it’s so crazy, there was so many tempatations in the city, so many people I have met who are so inspiring.

“I’m proud that tennis is getting more and more popular at home. I know I’m repeating what Ons said, you’re such an inspiration as well, but we’re trying to be good people and be good examples.”

Jabeur has to come to terms with losing her second successive Grand Slam final, as she had to come up with a consolation speech one again after losing out to Elena Rybakina in the Wimbledon final in July.

“I want to thank the crowd for cheering me up and I really tried but Iga didn’t make it easy for me,” said the Tunisian. “She deserved to win today. I don’t like her very much right now but it’s OK.

“This has been an amazing two weeks backing up my final at Wimbledon. I’m going to be working hard and we’ll get that title real soon.

“I tried to push myself to do more, getting the major is one of the goals and hopefully I can inspire more and more generations. I got inspired by so many champions – Martina inspired us, Arantxa and thank you also to my team, my friends.

“We want more and more kids coming and this is just the beginning of so many things.”

Tennis legend Martina Navratilova presented the trophy to Swiatek and then suggested the new champion could dominate the game for years to come.

“The biggest unknown is how well anyone will handle the nerves in a major final,” said Navratiolva.

“Ons came out nervous and she was always playing catch-up. In the end, Iga played her best tennis when it mattered most.

“You can see that Iga is on a mission. She has clarity in what she wants to do and she got it done today.

“Now she has won her last ten finals, with two majors in there as well. All credit to Iga.”