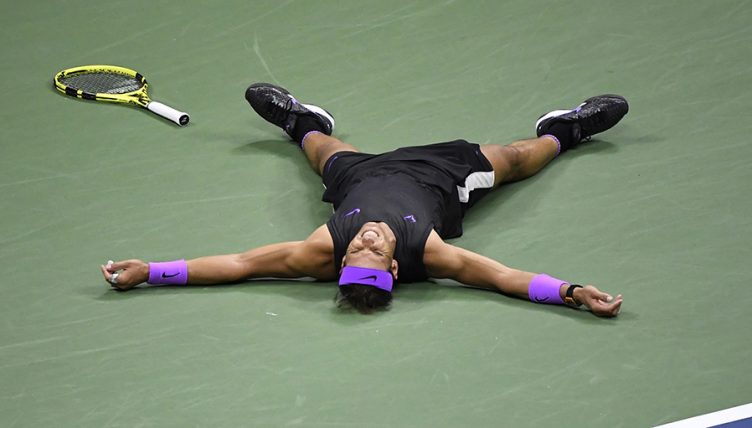 Nadal came into the final as heavy favourite following the quarter-final exits of Federer and Novak Djokovic, especially given his comprehensive defeat of Medvedev at the Rogers Cup last month.

And he looked to be cruising to a fourth US Open title, as he went two sets and a break up in the third. Medvedev, though, had other ideas, and he executed them stunningly to contribute to one of the best finals in recent memory.

Nadal, despite conceding the first break of the match, looked imperious early on, as he kept on injecting aggression into points at just the right times to keep the Russian at arms-length.

The constant pressure from Nadal eventually told, with him pinching the first set with a break in the 12th game.

That pattern followed in the second too, as Medvedev fought hard and kept hustling, winning plenty of battles along the way – but losing the crucial ones.

Things changed dramatically in the third set, though, with Medvedev serving first and forcing Nadal to do the chasing, and this time the roles were reversed.

The world number five dug deep, and produced his best spell of the match to snatch the third set from Nadal from a break down, largely down to embracing a serve and volley game to disrupt Nadal. He won the set from a break down, and stunned the engrossed crowd in Arthur Ashe Stadium by claiming the fourth too and forcing a decider.

However, the physical toll of the comeback, along with Nadal’s warrior-like resistance, proved too much for Medvedev.

Despite some simply incredible rallies along the way, the Russian eventually buckled, allowing Nadal to get the all important final-set breakthrough to win a stunning final.

It is Nadal’s 19th Grand Slam crown, leaving him just one behind Federer’s record and almost certain to surpass him.