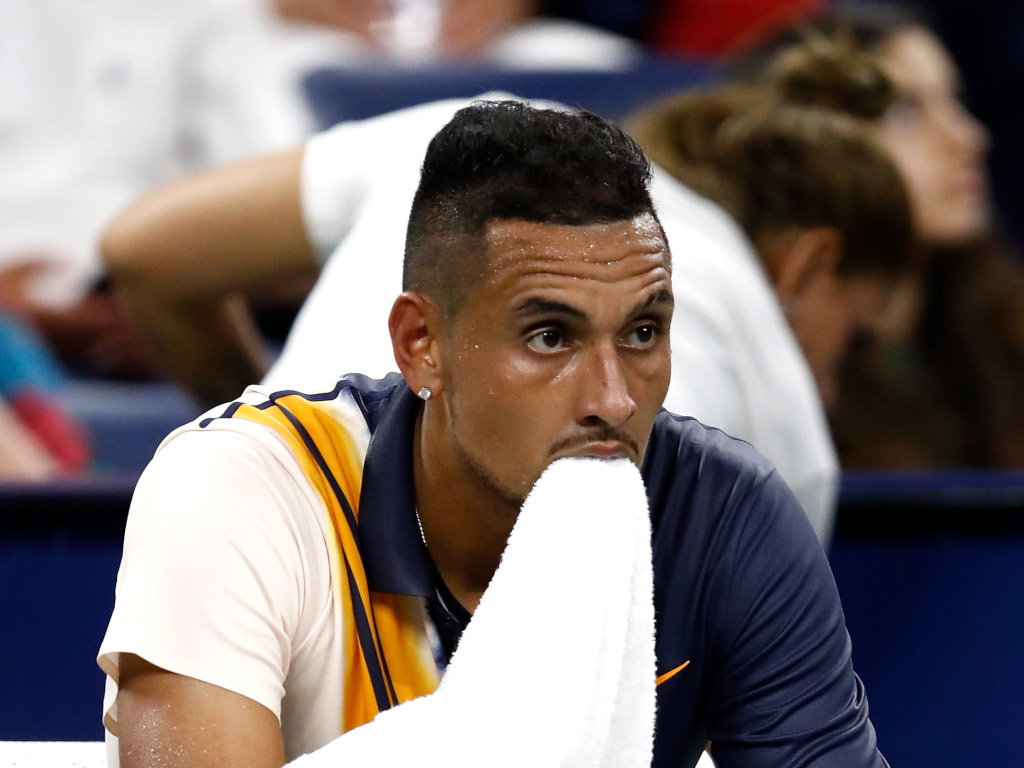 Nick Kyrgios’s US Open clash against Pierre-Hugues Herbert hit the headlines on Thursday after he received a pep talk from umpire Mohamed Lahyani.

The Australian lost the opening set against Herbert and found himself down in the second when the Swedish official came down from his chair to have a chat.

Of course every man and his dog had an opinion on the incident.

First to the man himself, Kyrgios, who had the follow to say after the match.

“You know, the same thing happen to me, it’s happened in Shanghai before when we all know I had that moment in Shanghai where the referee said the same thing, It’s not good for the integrity of the sport, doesn’t have a good look.

“I wasn’t feeling good. I know what I was doing out there wasn’t good. I wasn’t really listening to him, but I knew it wasn’t a good look. It didn’t help me at all. Like, I was down 5-2. If it was 3-0, and maybe if I would have come back and won six games in a row, fair enough. Didn’t help me at all.’

As for whether or not the umpire deserves to be sanctioned, Kyrgios added: “I don’t believe that he deserves it. I mean, the umpire in Shanghai didn’t cop any backlash. It happened to me in Cincinnati two weeks ago against [Juan Martin] Del Potro, the exact same thing happened. I wasn’t putting forth my best performance.

“I did the same today. The umpire was like, Nick, you can’t be doing this. It’s a bad look. Same thing happened there.

“I’d be disappointed, yeah, for sure.”

Roger Federer, will face Kyrgios in the third round and the 20-time Grand Slam was asked how he would react should it happen when he takes on the Australian.

“That won’t happen. It will not happen twice in a row. It’s not the umpire’s role to go down from the chair.

“But I get what he was trying to do. He behaves the way he behaves. You as an umpire take a decision on the chair, do you like it or don’t you like it?

“But you don’t go and speak like that, in my opinion.”

He added: “It was not just about ‘how are you feeling? ‘Oh, I’m not feeling so well.’ Go back up to the chair.

“He was there for too long. It’s a conversation. Conversations can change your mindset. It can be a physio, a doctor, an umpire for that matter.

“That’s why it won’t happen again.”

The statement from the US Open Tournament Referee.

“After the third game of the second set in the Kyrgios-Herbert match on Court 17, with Kyrgios down 0-3, Chair Umpire Mohamed Lahyani left his chair to check on the condition of Nick Kyrgios.

“He came out of the chair because of the noise level in the stadium during the changeover to make sure he could communicate effectively with Kyrgios.

“Lahyani was concerned that Kyrgios might need medical attention. Lahyani told Kyrgios that if he was feeling ill, that the tournament could provide medical help.

“He also informed Kyrgios that if his seeming lack of interest in the match continued, that as the chair umpire, he would need to take action. He again suggested to Kyrgios that he could receive medical attention.

“At the next changeover, Kyrgios down 1-4, received treatment from the physio.”

Frenchman Herbert was unimpressed by the statement from USTA.

“After my loss in the second round of the US Open against Nick Kyrgios and the controversy that followed I feel like I needed to give my point of view,” he said in a statement on Thursday night.

“First of all I did not hear the discussion between Lahyani and Nick and it did not affect me at all.

“Nick from his side is not to blame as he did not ask for anything. But his behavior and motivation on court changed from this moment and then he dominated the match,” Herbert said in a statement.

“On the other hand after seeing the video I am angry against the umpire. He should not go down of his chair and try to reason Nick. Did this action affect the game? We will never know …

“I am even more upset against the statement of the USTA that is clearly taking us for fools. We all hear on the video what the umpire said to Nick overpassing his function. Err is human but I still wait for explanation.”

And then there was Andy Roddick’s view.

So first off Layhani is a good man who genuinely cares about people. I really like him as a human….. he did something he shouldn’t have. This is behavior we should see more of these days. Unfortunately it was the wrong time/place for it. Selfishly I hope they go easy on him https://t.co/lwU63jVS3I

Former ATP head of officiating Richard Ings had the following to say.

I am racking my brain to think of a situation requiring a chair umpire to speak like that to one player.

I umpired thousands of matches

I was ATP head of officiating

I can’t think of one. https://t.co/mq4bbfkVUz

Didn’t know umpires were allowed to give pep talks .. https://t.co/82k0cQvwZM

It’s not the end of it though.

USTA clarifies that the Lahyani-Kyrgios incident is not yet settled; still under review by tournament officials (tournament director, tournament referee, and chief umpire). #usopen