Serena Williams’ last dance continues at US Open: Diamonds, gold, celebrities – but no farewell just yet 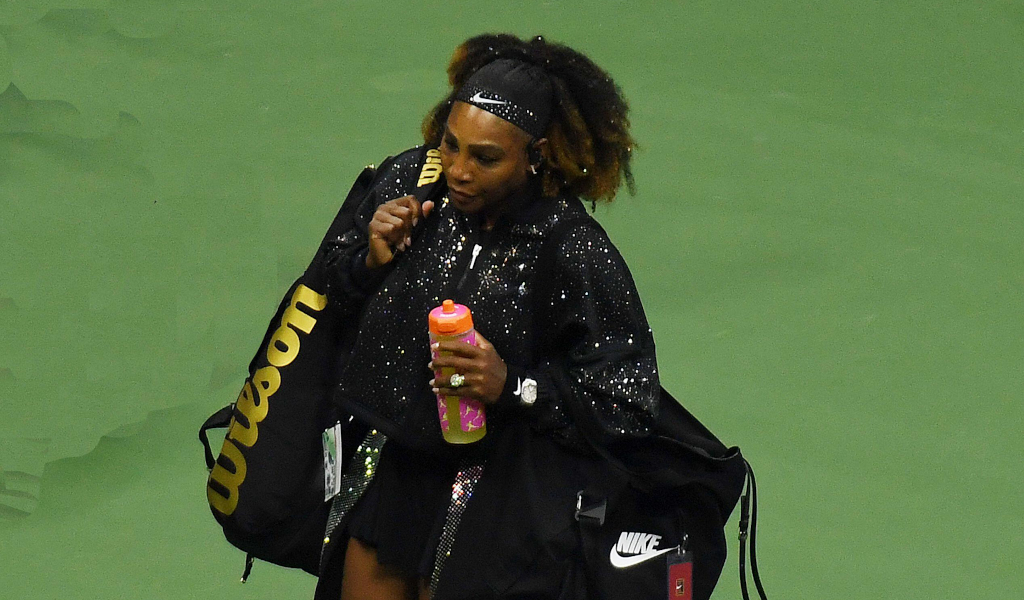 The Serena Williams farewell tour rolled into the second round of the US Open as the tennis icon kept her retirement champagne on ice with a straight-set win over Danka Kovinic on a packed Arthur Ashe Stadium on Monday evening.

The 23-time Grand Slam winner arrived on court in a figure skating-inspired black dress designed by herself – complete with a train, crystals, diamonds and gold – while her sponsor Nike provided the diamond encrusted shoes.

Spike Lee was at the coin toss while the stands were filled with politicians and celebrities like Bill Clinton, Queen Latifah, Mike Tyson, Bella Handid and Anna Wintour, but for Williams her biggest fan was her daughter Olympia, who wore a matching out.

After the hustle and bustle died down, the match finally got underway and it was a confident start from the tennis icon as she won her opening serve despite a couple of double faults.

And she certainly had the crowd on their feet in game two when she showed great movement to get to the net before brilliant reflexes set up a point and ultimately a break.

But Williams’ serve – one of her biggest weapons over her career – started to misfire as she was unable to back up the break as Kovinic hit back.

And when the world No 80 broke for a second time to go 3-2 up, many feared the worst only for Kovinic to also produce a poor service game and the American took advantage to draw level before going 4-2 up with a love hold.

The Montenegrin’s game then completely collapsed as Williams broke to love and then served it out despite Kovinic throwing everything at her, saving four break points in the process.

The opening set certainly gave the former world No 1 more confidence and she started to move even better, going toe-to-toe with her younger opponent.

Serena Williams on her transition, changing tennis and being proud of her curves

After Kovinic saved break points in her first two service games, Williams had the crowd on their feet as she broke to in game five and those cheers were even louder when she held to love to 5-3 up.

Kovinic produced a shocking service game and the tennis icon found herself 0-40 up and when the Montenegrin hit the ball into the net, the fans were on their feet again as she won 6-3, 6-3.

After the handshakes, Williams ended with her famous twirl before a farewell ceremony – featuring talk show host Gayle King, Billie Jean King, a pre-record message from Oprah Winfrey – among others – took place on court, even though her 27-year career will continue for at least one more match.

The American will be back in action on Tuesday as she will team up with sister Venus in the women’s doubles while she will be in second-round singles action on Wednesday – presumable on Arthur Ashe again – as she will face second-seeded Estonian Anett Kontaveit, who defeated Jacqueline Cristian from Romania 6-3, 6-0.