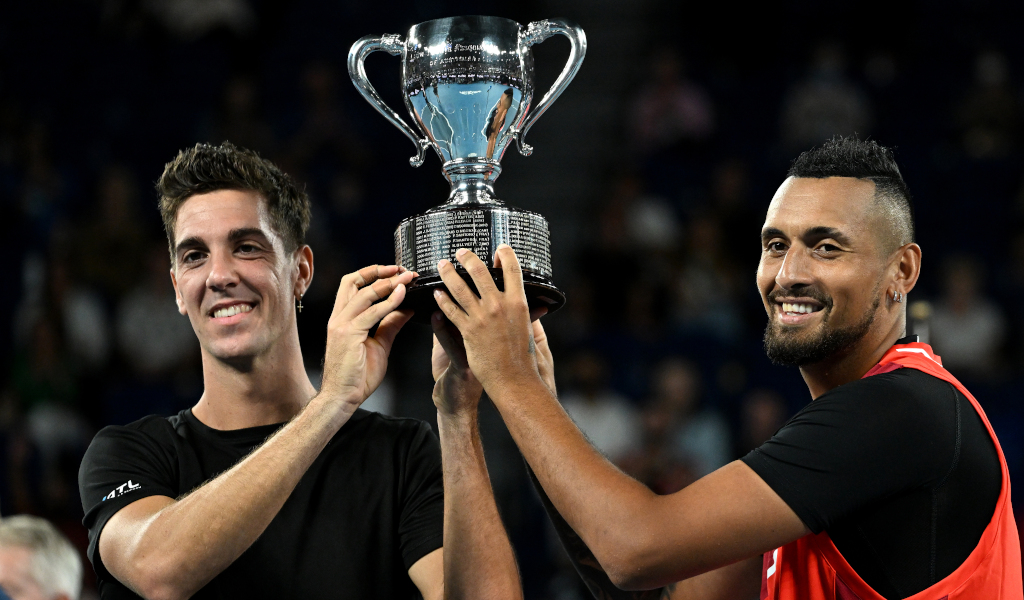 Thanasi Kokkinakis isn’t sure what to expect from his match against sometime doubles partner Nick Kyrgios at Flushing Meadows on Monday.

It will be the first time the two have met since contesting the Australian Open junior final back in 2013.

Kokkinakis has revealed that he has spoken to Kyrgios about the match with both men disappointed to be meeting in the first round.

“I was definitely surprised and then a little disappointed for sure. We wanted each other to do well and go on a run,” Kokkinakis told Eurosport.

“We were talking to each other and Nick was saying like, it’s annoying that this is a first round [match] because we could have played hopefully later if we had the right draw and could have made a good run, but it is what it is.

Kokkinakis says that being draw against each other in a Grand Slam hasn’t changed their relationship.

“We haven’t been avoiding each other that’s for sure. We’re talking all the time. Nothing’s changed,” Kokkinakis said.

“We’re still talking s*** to each other in the locker room, and sending each other random stuff on Instagram, so nothing’s changed. I’m sure when we get out on court… I don’t actually know.

“I don’t actually know what it’s going to be like when we get out there. But around the locker room and that… I think it’s one of those things where two mates play, give it what they have on court and at the end, barring anything crazy on court, I think we’ll grab a drink after and we’ll be fine.”

Kokkinakis expects chaos from Kyrgios and is a little bit relieved that he at least knows what to expect.

“My focus is s*** at the best of times. So at least I know with Nick what’s coming,” he added.

“He brings a circus with him wherever he plays and he lives in the chaos a little bit with how he plays his matches. He plays really well when he does that because he’s just more comfortable in that environment and that’s how he’s always been.

“I’ll just try and find what’s going to work best for me. I think he’s used to joking around and playing like that, but I don’t know. I don’t know how he’s going to come out in the match honestly.”

Kokkinakis stopped short of suggesting that he has some inside knowledge that would help him unlock the Kyrgios serve instead saying that if Novak Djokovic got aced again and again by him, then he might not stand much of a chance.

“I’ve been on the other end of it,” he chuckled.

“It’s definitely not easy to return. If he can serve however many aces he served against Djokovic at Wimbledon (in the final), and he couldn’t really find a read on it, then I don’t know. I do give the edge to Djokovic over me in the returning front.

“That’s definitely going to be the biggest hurdle.”