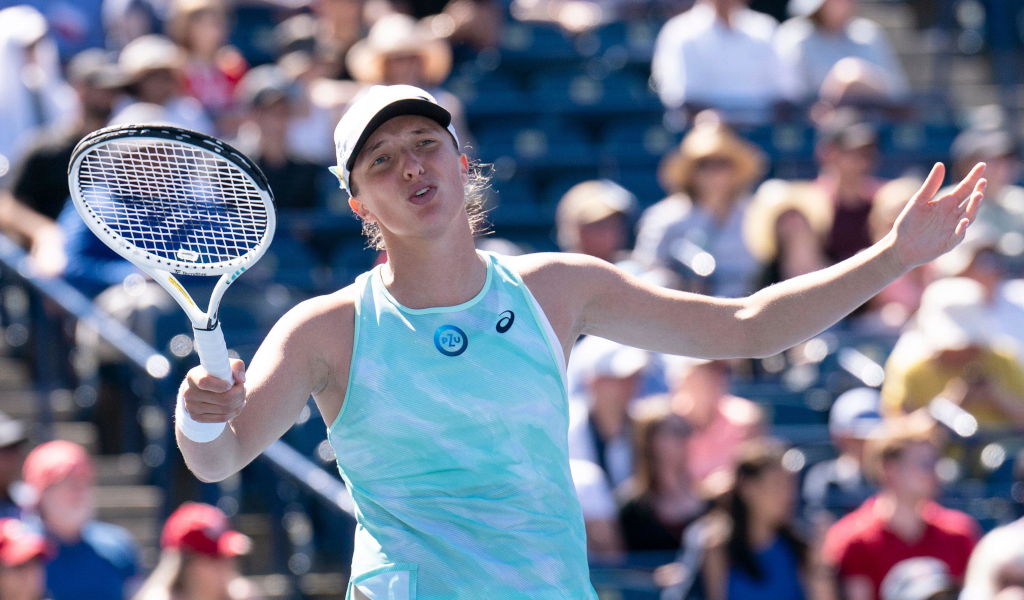 World No 1 Iga Swiatek has suggested the balls being used at the US Open are not conducive to great tennis and that view has been backed up by a player who has tried to play with them in the last few weeks.

Rising British star Sonay Kartel enjoyed her first trip to America as she played in an ITF tournament in the Bronx and then at US Open qualifying.

While her trip to New York was not success, the Brighton-based 20-year-old has told us that the balls being used for the final major of the year are as tough to control as Swiatek suggested.

The US Open used lighter balls for the women’s event compared to the men’s tournament, making this the only Grand Slam tournament to employ different balls for men and women.

Now Kartal has revealed the balls in play at the US Open have the potential to “make you look silly” as they are so hard to control.

“It’s so different playing out here than practicing on the acrylic courts back home,” Babolat-supported player Katral told Tennis365.

“Everything is much more lively over here with the heat. The ball bounced a lot higher and they are difficult to control at times. I have managed to get a lot of practice matches in and you need those because it can take a lot of getting used to.

“The balls get scuffed up really fast. After six games, there are already going pretty bald and they fly like pellets.

“At first I thought it was me and I was missing by a long way. That is not a great feeling as you are not used to missing by that big a distance, but you realise pretty quickly it is the balls.

“Then you end up playing with a little too much caution and try to guide the ball into the court and that is not a good approach.

“You need to fully commit to it and when you do that, it seems to be easier to control the ball, but you need to learn this when you start playing on these courts and with these balls.”

Kartal’s comments follow on from Swiatek’s suggestions that the US Open balls are unsettling the game’s top female players, with Ash Barty’s coach making similar suggestions as the former world No 1 crashed out in New York early last year.

“I don’t know why they are different than men’s ones,” Swiatek said. “I don’t know, like, 15 years ago probably women had some elbow injuries because the balls were heavier, and they changed them to women’s balls, but right now we are so physically well prepared that I don’t think it would happen.

“I feel, it’s really hard to control [the women’s balls], but everybody has same conditions, so we are trying to deal with that. I don’t get why they are different, honestly.”

Swiatek has not been in good form since the end of her 37-match unbeaten run at Wimbledon, and the same can be said for most of the top 10.

There are 15 current or former grand slam champions in the women’s draw, including two-time US Open winner Naomi Osaka.

It has been a tough 12 months for the 24-year-old, who did not compete after the US Open last year as she prioritised her mental health and has struggled with form and fitness this season.

A troublesome Achilles problem kept her out of Wimbledon and she retired during her first-round match in Toronto two weeks ago with a back issue.

Osaka has won just one match since April, and she admitted she goes into the US Open with her confidence low.

She told a press conference in New York: “I feel like I would have lied a day ago or so and said that I was really relaxed. But actually, when I practised today, I felt very anxious. I think it’s because I really want to do well because I feel I haven’t been doing well lately.

“It’s tough. Of course, you don’t want to lose in the first round of a slam. I feel like I always do pretty well here. It’s kind of taking the pressure off of myself, but it’s always going to be there.

“I think the opponent I’m going to play is also really tough, so it adds a little bit extra. I’m just trying to enjoy the time that I have here.”

Now ranked down at 44, Osaka is unseeded and will take on Australian Open finalist Danielle Collins in the first round on Tuesday.

On her physical struggles, she added: “I would say it’s something that’s very frustrating but at the same time interesting because it made me feel like, ‘Wow, I really want to be able to play again like back how I used to’.

“I think my mindset now is just trying to have fun because I wanted to be here when I was a kid.”