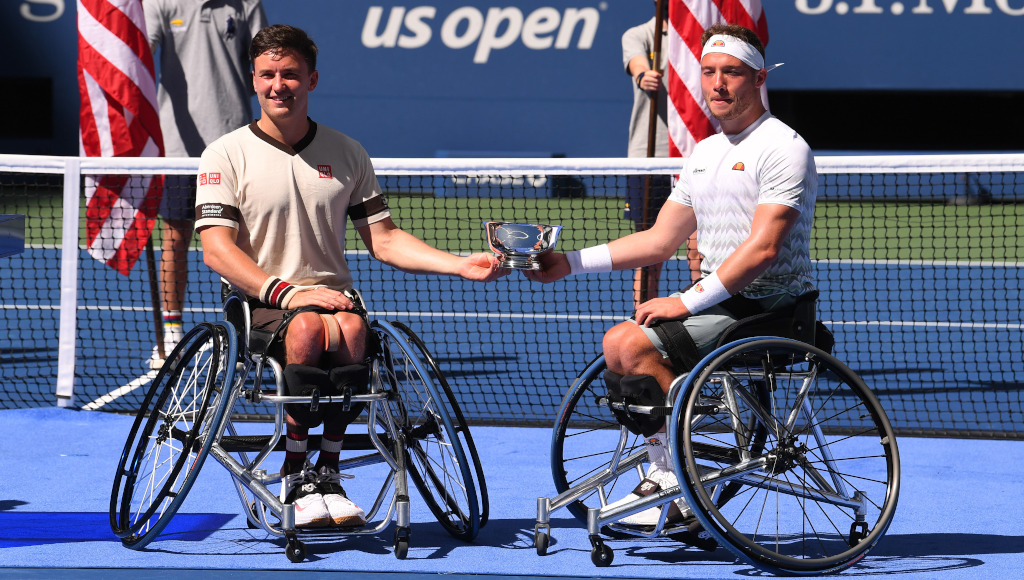 Alfie Hewett and Gordon Reid showed why they are the world’s top ranked men’s doubles partnership on Saturday’s penultimate day of the US Open Wheelchair Tennis Competition, as they claimed an unprecedented fourth title together in New York.

With players on the LTA’s Wheelchair Tennis World Class Programme having won four titles at Flushing Meadows in 2019, Hewett and Jordanne Whiley will now aim to help equal that record when they contest Sunday’s men’s singles and women’s doubles finals, respectively.

Reid, who stretched his own personal tally of US Open doubles titles to five after partnering Houdet to win the 2015 title, said: “It means a lot to both of us. I’ve not lost a doubles match here since 2014, so it’s amazing to have that record.

“At Wimbledon and Roland Garros last year we were pretty disappointed with the results and made a big effort with the team at the LTA to make sure we turned things around and improved. I think we can really take pride in our results since then.”

After winning the first two games but then dropping the next three, Hewett and Reid got the better of the early momentum swings and attacked Houdet’s serve in the 10th game, the Frenchman producing a double fault to give the Brits three set points.

The Brits only needed the first as Hewett made the most of the ball hitting the net cord and presenting him with the option of a cross court forehand winner, which he put away with pinpoint accuracy.

The defending champions grew in stature to take the first five games of the second set and two games later they were presented with their first match point. Hewett made short work of the opportunity as he feigned an overhead smash at the net and calmly put away a delicate drop shot to wrap up a dominant performance.

With Hewett and Reid winning the first ever wheelchair tennis final to be staged on Arthur Ashe Stadium, Hewett said: “I think there are always going to be patches when you’re not playing your best tennis and there were a couple of games in that first set when I was getting a bit frustrated, but then we took control of the match and played the style we wanted to and in the second set our level definitely went up.

“It’s pretty spectacular to be on Arthur Ashe for a final on a Saturday at midday. That doesn’t come around often, so you’ve got to make the most of it.”

Hewett, who plays on Louis Armstrong Stadium on Sunday as he faces world No 1 Shingo Kunieda of Japan in a bid to win his third US Open men’s singles title in a row, added:

“It really means a lot to us as players, for all the work we’ve put in off court and the training with our teams. To perform so consistently well at this tournament, you just have to embrace that.

“I’m sure Gordon will be sipping some champagne later, but I’ll be on the recovery drinks in preparation for tomorrow. Mentally I’m in a really good place, my confidence is at the highest that it’s been for a while and I’m sure it will be a great final.” 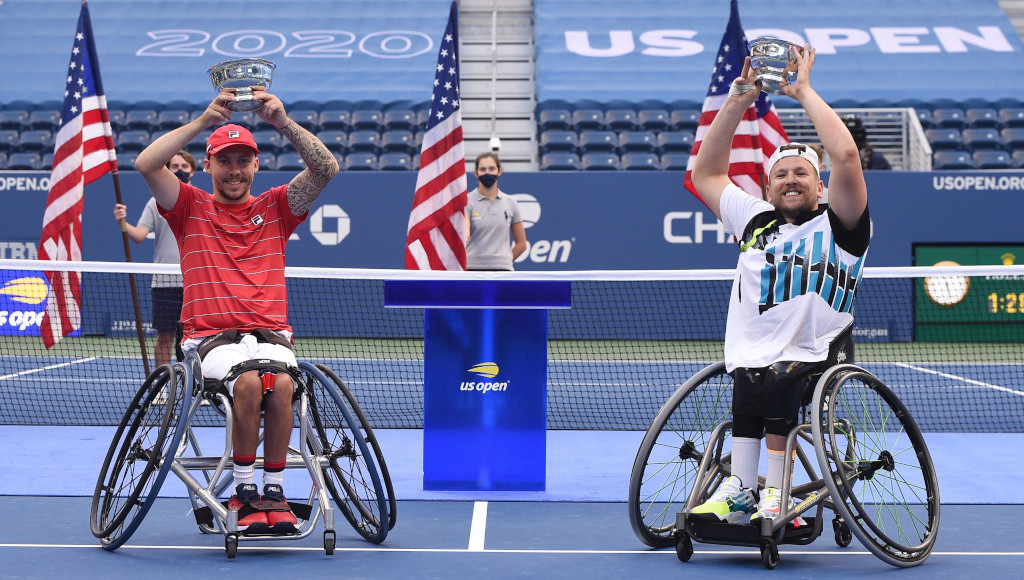 Like Hewett, Lapthorne ended the 2019 US Open as a singles and doubles champion. However, he had to recover from a below par singles performance on Saturday before partnering Australian Dylan Alcott to the quad doubles title.

Lapthorne and Alcott, the inaugural Wimbledon quad doubles champions in 2019 before winning their first US Open title together 12 months ago, had to come from behind before retaining their crown with a 3-6, 6-4, (10-8) victory over Dutchman Sam Schroder and David Wagner of the USA.

Schroder and Wagner gained momentum midway through the opening set to take the lead. However, Lapthorne and Alcott opened up a 3-0 second-set lead and although they missed chances to convert game points that would have given them a 5-1 lead, Lapthorne ultimately scrambled a drop shot over the net on set point to force a deciding match tie-break.

After a series of tense exchanges, Lapthorne and Alcott earned three match points and they needed all three before Alcott wrapped up their successful title defence with an ace.

Despite making it four US Open doubles crowns in a row, having won the 2017 and 2018 titles partnering Wagner, world No 2 Lapthorne still rued his singles performance against Schroder earlier in the day, which saw the Dutchman win their pivotal round-robin match 6-2, 6-1 to earn his place in Sunday’s final. However, Lapthorne conceded that the doubles final had produced an entertaining match. He said: “I think today you saw some of the best quad doubles that you could wish to see. It’s been a tough week. I expected more, to be honest. I feel that the only player that beats me is me.

“It didn’t go my way today and I’m not happy with the way I played, but it’s not the end of my world. I go home with another doubles title and get ready to go again in another few weeks at Roland Garros.”