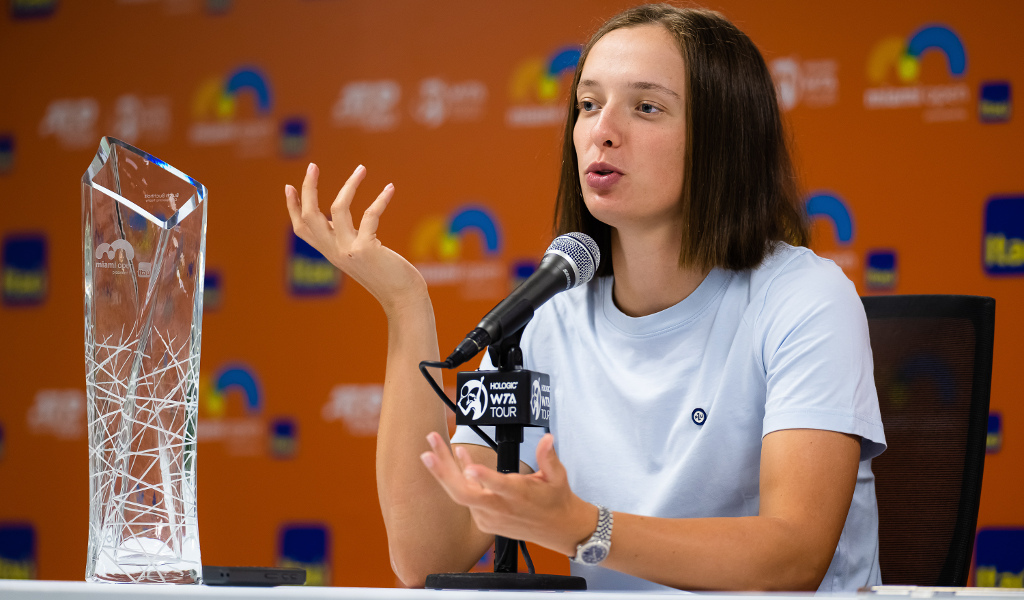 New world number one Iga Swiatek has recalled her emotions when she heard the news of Ashleigh Barty retiring from the game two weeks ago.

Barty shocked the tennis world when she announced her retirement just seven weeks after winning the Australian Open, and Swiatek was just relaxing in bed with her laptop when the news broke.

Iga Swiatek ‘has charisma’ to be a great world No 1

Swiatek has since replaced Barty as the world’s top-ranked player and won the Miami Open this past weekend.

She is currently on a winning streak of 17 matches, having also won the WTA 1000 tournaments in Doha and Indian Wells in recent weeks.

“Mainly, it was because of Ash’s retirement. I didn’t know it was going to happen and it really surprised me.

“I always had this vision that we would all play until we are 35 or something, until our bodies are so tired that we can’t any more.

“I needed time to actually understand what she must have thought. Her decision was really brave and I felt a lot of emotions because of that.”

Ushering in a new era 💫

Swiatek became a household name when she won the 2020 French Open title as a teenager, but all of a sudden found herself in a position where she could become the top female player on the rankings.

“I also felt emotional because of my own position,” she continued.

“I realised after two hours of being really emotional that ‘hey, you don’t know what is going to happen yet and you still have to win some matches’.

“So I told myself ‘let’s wait with the emotions and with being excited because I have work to do’.”

She secured her position at the top of the rankings with a second-round win against Viktorija Golubic in Miami.

The mantle of being the world’s best player didn’t seem to weigh heavily on the Polish player, and didn’t drop a set in the remainder of the tournament.

This included a 6-4, 6-0 victory over four-time Grand Slam winner Naomi Osaka on Saturday, where her defensive skills forehand winners were on show.

“Emotionally it has been really intense and I have felt a range of emotions – from being proud and having satisfaction, to confusion and surprise,” Swiatek reflected.

“These last weeks showed me I can trust in myself a little bit more and trust my skills and my tennis. Before I didn’t really know it was possible for me to have a streak like that. So it also kind of surprised me.

“After Doha and after Indian Wells I didn’t have time to digest what I’ve achieved. Right now I am going to take some time to analyse what happened from a ‘work’ point of view.”