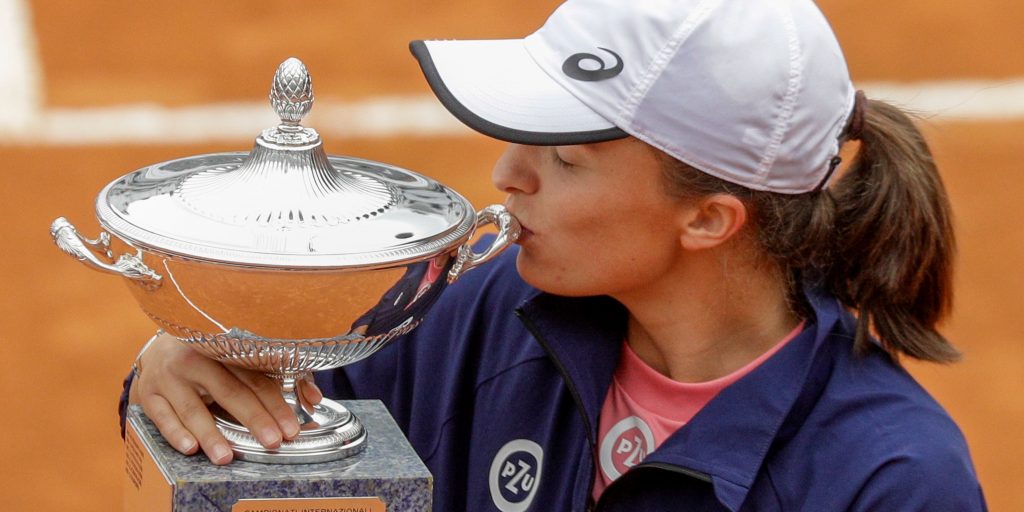 The 19-year-old reigning French Open champion lost only 13 points in the entire match and will climb into the world’s top 10 for the first time after her crushing win.

It is only the fourth time since 2000 that a WTA final has ended in a double bagel and is the shortest completed WTA final since Istanbul in 2009 when Vera Dushevina defeated Lucie Hradecka 6-0, 6-1 in 41 minutes.

Ninth seed Pliskova, tournament winner in 2019, failed to win a game in a completed match for just the second time in her career.

The 29-year-old, from the Czech Republic, was playing in her third consecutive final in Rome having retired in last year’s final due to a leg injury as she trailed Simona Halep 6-0 2-1.

Swiatek, who had saved two match points against Barbora Krejcikova in the third round, made only five unforced errors against Pliskova and struck 17 winners.

In contrast, Pliskova served two double faults in each of her first two service games and did not hit a winner until she was set point down after 19 minutes.

“When I was on the breaks, I was visualising that I’m starting that match from the beginning every time. Actually, I did that so well that I didn’t even know that it was 6-0 in the first set.

“The key is just to not to think about it and just, you know, play. Because when you’re gonna think about the score, you can actually ruin your mindset and ruin your attitude.

“From the beginning I felt that she may be a little bit nervous,” said Swiatek. “I wanted to use that and actually play as many games with that vibe as I can. That’s why it was pretty fast at the beginning.

“I saw that because I thought her movement wasn’t really good, but I also had in my mind that she’s gonna start in a minute feeling better and being in a rhythm. So I wasn’t really focusing on that.”

Swiatek, who lost four points in the first set and nine in the second, faced only four game points against her as she registered her third career title and first at a WTA 1000 event.