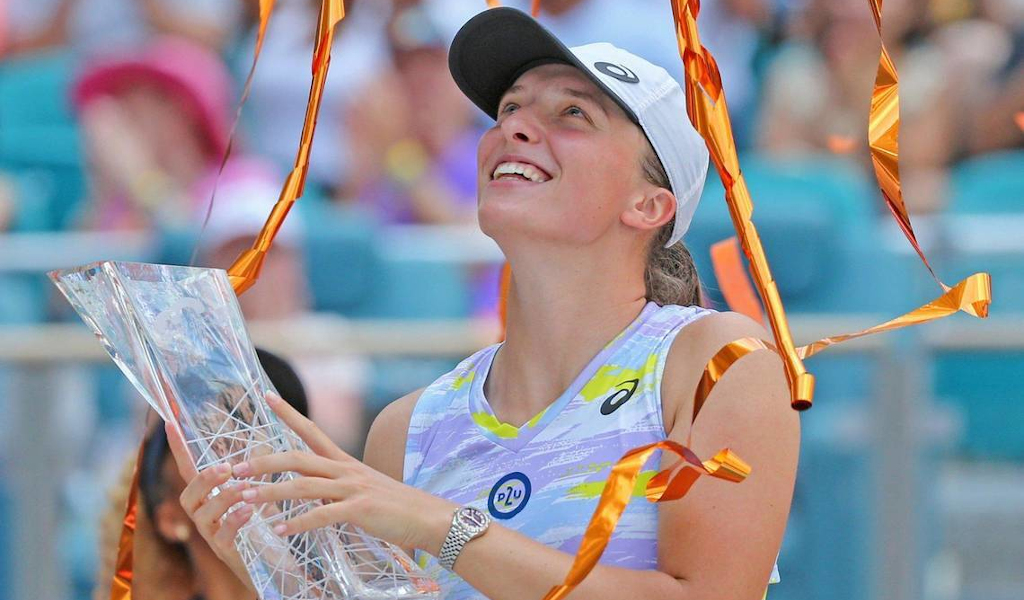 Iga Swiatek has cemented her status as the new world No 1 with a stunning win against Naomi Osaka 6-4, 6-0 in the Miami Open final.

With Ashleigh Barty retiring and remove herself from the WTA rankings, Swiatek confirmed she is a worthy leader of the women’s game with a commanding performance in Miami.

“These weeks were so intense I didn’t really know if I would able to keep up with the streak that I have,” said Swiatek, who completed the ‘Sunshine Double’ as she added the Miami title to the Indian Wells trophy she claimed last month.

“It’s amazing for me that I could show mental toughness because my whole life I thought I could do more and sometimes I was losing and I didn’t even know why. This season I feel like everything clicked so it’s great and I am really happy.”

Swiatek is almost 1,700 points ahead of her nearest rival on the WTA rankings list that will be released on Monday, with Osaka offered some compensation for her defeat as she will make a huge leap up the standings.

Osaka slipped down the rankings after losing the points she collected at the Australian Open in February 2022 and she slumped into the 80s.

Now she is set for a rankings leap of 41 places, as she will be back in the world’s top 40 next week, with her ranking set to be at 36.

That is likely to rise further in the coming weeks as she has limited points to defend in the next two Grand Slam events after she pulled out of the French Open and Wimbledon last year citing mental health issues.

“Firstly I wanna dedicate this one to all the people who support me and my fans, I haven’t been in this position for a little minute,” said Osaka after her defeat against Swiatek<

“I know this isn’t the outcome you guys wanted but I had a lot of fun and I’ll work hard to have more opportunities like this again.

“I want to congratulate Iga. I was just thinking yesterday about when I had that dinner with you in Australia: watching that journey has been incredible. You’re a really incredible and amazing person and I hope you keep going forward, congratulations.

“If I could be a little bit more selfish I want to thank my team, they’re the ones that keep pushing me forward They’re the rock that stays by my side. Just to be in a final again means a lot to me. Thank you, my guys.”