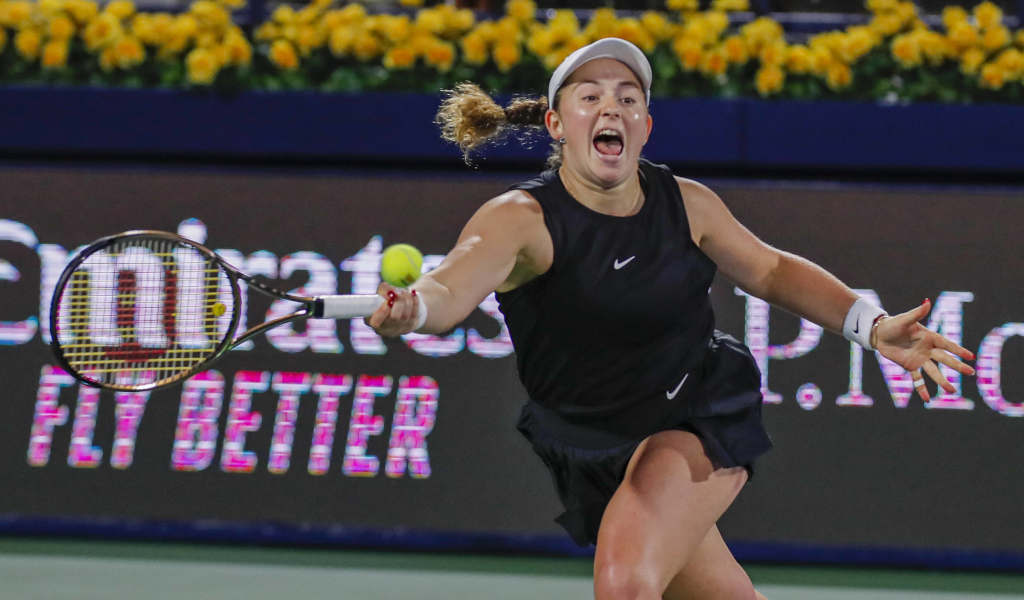 Jelena Ostapenko came from a set down for the third straight match to defeat Simona Halep and reach the Dubai Duty Free Tennis Championships final.

Ostapenko will meet Veronika Kudermetova, who advanced via walkover after Marketa Vondrousova withdrew injured, in the final.

The plucky Latvian has beaten a Grand Slam champion in all four rounds en route to the final, taking out Sofia Kenin, Iga Swiatek and Petra Kvitova, before defeating Halep.

🇱🇻 @JelenaOstapenk8 comes from a set down for the third Dubai match in a row to reach the #DDFTennis final! pic.twitter.com/jfTccBbmX3

Ostapenko has now reached 11 WTA Tour finals having set out to play an aggressive game against the former World No 1.

“I knew I have to play aggressive no matter what the score is,” Ostapenko said afterwards. “She really doesn’t like to play against players who are playing aggressive and take time away from her.

“[At first] my legs were, like, standing. They were not moving in the first set. That’s why I was missing. When I changed that, everything changed. I don’t think I really needed Plan B for this match. I think Plan A had to work well, and that’s what happened the second and third sets.”

Ostapenko tried to force the pace early on and it backfired as she dropped the first set.

She would find her rhythm in a hard fought second set that went to a tiebreak.

After a back and forth which saw her first lead the set 3-0, then get pegged back to 3-3 by a flurry of errors.

She hit her straps from 6-6, first blanking Halep in the tiebreaker and then flying out to a 5-0 lead in the decisive set.

Halep could have avoided the bagel after holding two game points in the sixth of the set but Ostapenko roared back again completing another fightback and further building momentum.

Vondrousova withdrew due to a right adductor injury, giving Kudermetova a walk-over but she would do well to be wary of Ostapenko, despite her opponent’s arduous path to the final.