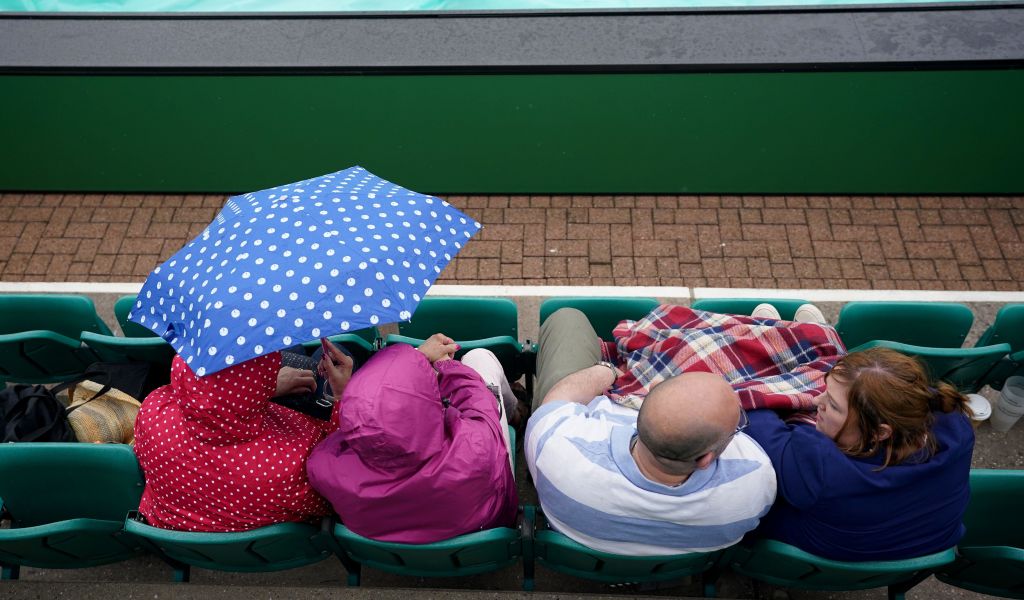 Four hours – the time in which the heavens opened and world No.5 Maria Sakkari, her opponent and a collection of doubles teams were given orders to retreat inside to the dry comfort of the players lounge to when they were allowed back outside, writes Taylor Toney-Green.

The adjective ‘comfort’ is a term used loosely.

The players’ lounge large hall filled with sofas, dining tables, a food bar and a coffee machine. For entertainment? One ping pong table and a games console. This was the tennis version of an A&E waiting room; minus the gore, double the frustration.

The No.1 seed at the Nottingham Open, Sakkari, had already ventured out onto Centre Court twice. The first time involved a 1-6 drubbing in the opening set and on the second occasion she reached her chair only to turn around again as the rain fell. God is not a tennis fan.

Sakkari’s day started by arriving at the Nottingham Tennis Centre well before the crowds had eagerly made their way through the gates. Preparation is pivotal and the Greek star spent the morning finalising her game-plan with coach Tom Hill, a quick hit to get her into the groove and time for a bite to eat.

If those tactics were spot on, she’d have been back at the hotel before the first clouds descended over Nottingham. They were far from it. Canadian Rebecca Marino had not played a grass event since 2011 until her first round victory yet played with all the glamour and talent of Roger Federer on the All England Club courts.

By the end of the opening set, Sakkari would not have been blamed for wishing the weather would take such a turn.

And it did, but only after the world No.5 edged a 5-3 lead in the second set. Momentum was in her back pocket and we looked headed for a final set decider. A third course of this ever-lasting contest would have to be played out in their minds.

They waited and they waited. At first, Sakkari intended on staying active. A light jog and a row as she stationed herself in the gym. As time went on, so did the frustration. More so for the paying public, who had only witnessed 62 minutes of action on Centre Court for their hard-earned dollar.

Patience was growing thin amongst the rest of the roster, as were available courts. Another casualty of the rain were the eight grass practice courts. Such shortages occurred on Sunday as players battled and pleaded with the practice desk to book thirty minutes of court time.

Sakkari finally served out the second set, four hours later than she would’ve liked, and a final set decider was on its way.

In those 240 minutes, it was the former-world No.3 that won the mental battle. Sakkari won seven of the final 10 games to clinch a third quarterfinal appearance in Nottingham.

Speaking to the press, the long wait had not phased her. Sakkari said: “You get used to it in the UK. In these places it does rain more so you have to be prepared.

“You have to warm-up 15 minutes before you go back out, at least that’s how I do it. I think I warmed-up like three times because it kept raining.

“My brother was here [he resides in London], so I spent time talking with him distracting my mind. I also ate, but nothing fancy.”

Derbyshire’s Jay Clarke had previously played every one of his matches at the Nottingham Open on Centre Court, yet his appeal as a hometown player fell sacrifice to the sellotaped and re-bandaged schedule. His encounter with No.3 seed Jordan Thompson was moved onto Court 3 where he would bow out of the tournament.

There was another pair that had played and then completed the waiting game as by the time they stepped onto Centre Court to complete their tussle it had been over 24 hours since they were introduced on it.

Harriet Dart and Camila Giorgi would spend a muscle-seizing, mind-numbing day in the players lounge.

The only way the two-day contest could end was via a tiebreak and the Brit converted her only match point, saving three from the Italian, to make her first-ever WTA quarterfinal. Dart was delighted and the crowd’s desire for tennis had been quenched.

Pray all you like for clear skies and a beaming sun, but this is the British grass-court season. Nobody listens.