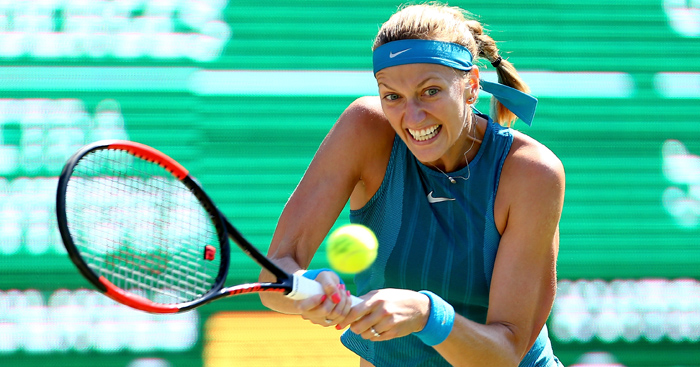 Petra Kvitova continued to show why she’s a Wimbledon favourite by defeating Julia Goerges in Birmingham.

The Czech produced 20 winners in the quarter-final clash, easing to a 6-1 6-4 win in just 67 minutes to maintain her record of not dropping a single set yet in this year’s competition.

“I think the score looks a little bit different compared to game. I think I found my game after the second half of the first set,” Kvitova said after the match.

“I think in the beginning of the match, we were both kind of finding the rhythm, the serve and the shots, especially on my serve.

“I think sometimes I was pretty lucky that she missed the return. When I broke her serve, it was a little bit kind of better for me, but was still trying to find good rhythm on the serve which I found afterwards.”

Kvitova will face Mihaela Buzarnescu in the semi-finals after the Romanian beat second seed Elina Svitolina 6-3 6-2.

“I think she’s pretty confident right now. She’s in good form as we see. Until I met her in Prague final, I didn’t really know much about her. Obviously, I heard the name, saw the name doing well in the draw, but I never really paid attention until that time when we play three-setter.

“It was a really big fight,” said Kvitova of her upcoming opponent.

“She’s a lefty. She’s playing with the confidence with nothing to lose.

“For me, she seems to be really relaxed every time she’s on the court, off the court. That’s probably her biggest weapon now.”

Magdalena Rybarikova and Barbora Strycova will meet in the other semi-final after they overcame Dalili Jakupovic and Lesia Tsurenko respectively.