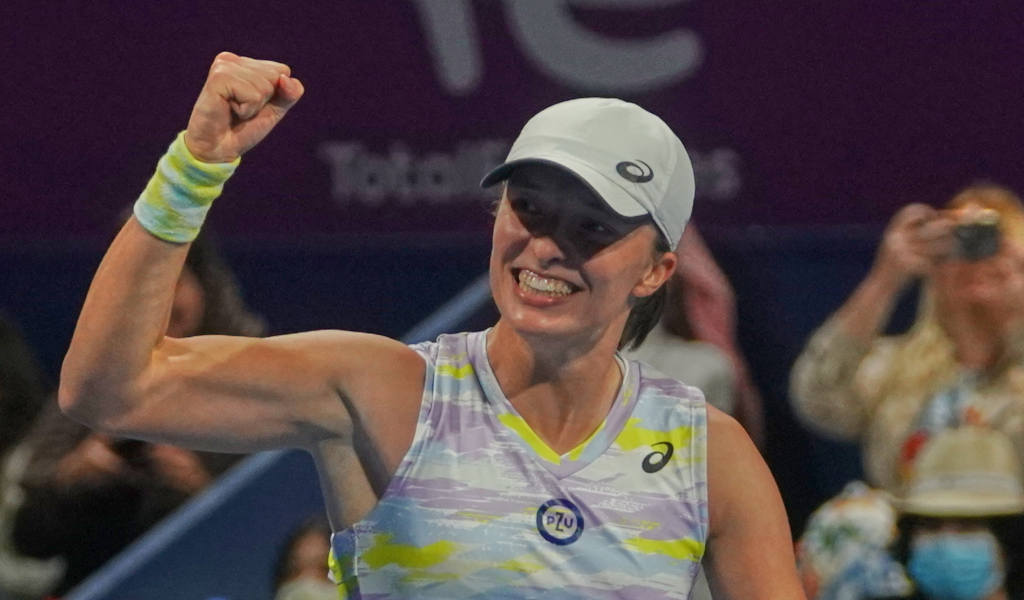 It is the first title of the year for the young Pole who ended Kontaveit’s nine-match winning streak.

Kontaveit’s allround game has been impressive in 2022 but Swiatek was on another level in Doha, and would not be denied.

Swiatek has now won her last four tour-level finals and only dropped 11 games in the process.

She refused to fall into any of Kontaveit’s traps on this day. Iga Swiatek won a staggering 66 per cent of points returning serve and saved six of the seven break points she faced.

The 20-year-old is now 3-2 against Kontaveit, and Swiatek has won their last three meetings, including at Roland Garros and the US Open in 2021.

Swiatek used the occasion of her victory to show support for the Ukraine, who share a border with Poland.

“I want to show my support to all the people who are suffering in Ukraine,” Swiatek said.

“Seeing those images is really emotional for me. I wouldn’t even imagine stuff happening like that in the country next to me.”

Having fallen behind an early break to Swiatek, Kontaveit soon looked to be back in the hunt. She slammed a forehand winner down the line to quickly break back for 2-2.

However, that would prove to be her final appearance on the scoreboard in the match.

Swiatek snatched her break right back in the following game, then kept using aggressive returns to take control of points from the outset on Kontaveit’s serve.

The seventh seed calmly erased two break points before closing out the one-set lead in the eighth game.

Iga Swiatek had few problems in the second set, which she raced through in less than half an hour.

Kontaveit was able to keep games close in the opening stages of the set, but there was no stopping Swiatek’s power game.

“I’m pretty happy that I was composed and I stayed in the same shape I was for the whole tournament, because playing finals is a different feeling,” Swiatek added. “It’s always a little bit more stress.

“I knew that Anett is going to play well, because she’s shown consistency throughout the whole six months, I would say. I needed to put pressure on her, and I’m pretty happy that I did that well today.

“It’s so nice to have these kind of matches where you don’t actually have problems with keeping the pace and with staying aggressive, because right now I’m a more aggressive player, and I really love it, because it’s giving me a lot of confidence on and off court. It’s just making sometimes life on court easier.”