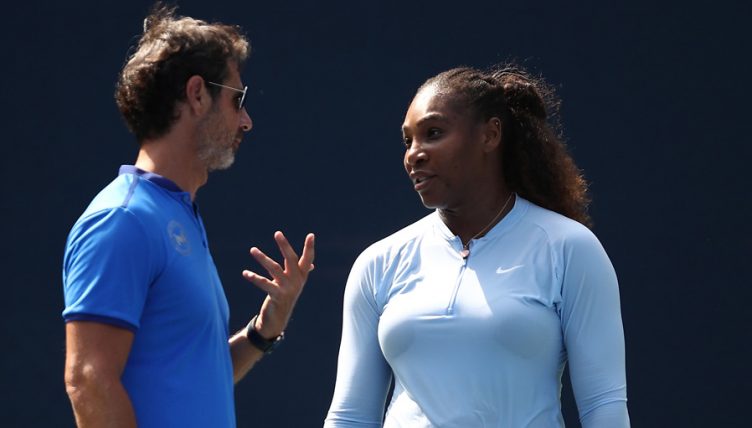 Patrick Mouratoglou, the coach at the centre US Open final that resulted in Serena Williams being given a code violation, says it is time to allow on-court coaching at Grand Slams.

Williams was given a code violation by chair umpire Carlos Ramos for coaching during the final against Naomi Osaka. She was enraged by the decision and things escalated from there as the 23-time Grand Slam winner was given code violations for racket abuse and calling the umpire a “liar” and a “cheat” with the latter incident also resulting in a game penalty.

The 23-time Grand Slam winner insisted after the match that she “never cheated in her life”, but Mouratoglou admitted that he used hand gestures during the match.

More than a month down the line and the Frenchman has come out and urged authorities to adopt on-court coaching, which is already used at some women’s events, but not majors.

“One very good thing has happened as a consequence of Serena Williams’ experience in the US Open final: people throughout tennis are again discussing the whole issue of on-court coaching,” he said in his latest column in Tennishead magazine.

“It is an issue that has actually been on the agenda for all the sport’s governing bodies for five years.”

He added: “At the moment we’re in the worst of all worlds. On-court coaching is clearly widespread, but it is unstructured, players are occasionally given code violations for it and TV viewers are given no insight into what the coaches are telling their players.”

Mouratoglou continued on Twitter, saying allowing on-court coaching would give spectators and TV viewers a better insight into the game and would “add to the drama”.

“It is a very basic truth that the vast majority of tennis coaches are actually coaching on court, despite the rules.

“Look at how many times players look towards their boxes during a match. Some do it after every single point. Of course, coaches are usually discreet in the way they give messages to their players – they do it with signs or with coded signals – but most of them also communicate verbally.

“Occasionally the players are punished for it, but for the most part they are not, because the federations are perfectly aware of the situation and don’t ask umpires for a strict application of the rule.

“It is time for tennis leaders to amend the status of coaching. It is time to authorise and structure – something that the WTA has initiated in 2008 when it allowed on-court coaching for all tournaments apart from the grand slams – practices that have been tolerated all over the world for decades. This, I believe, would ensure that tennis sustains its development.”

“You want spectators and TV viewers to have opinions about the players – and the coaches – and to know who they like and who they don’t. Watching the interactions between players and coaches is a very good way of achieving this.

“Emotions run high when coaches talk to their players during matches. Sometimes the players don’t like to hear what their coaches are saying, but this all adds to the drama.”