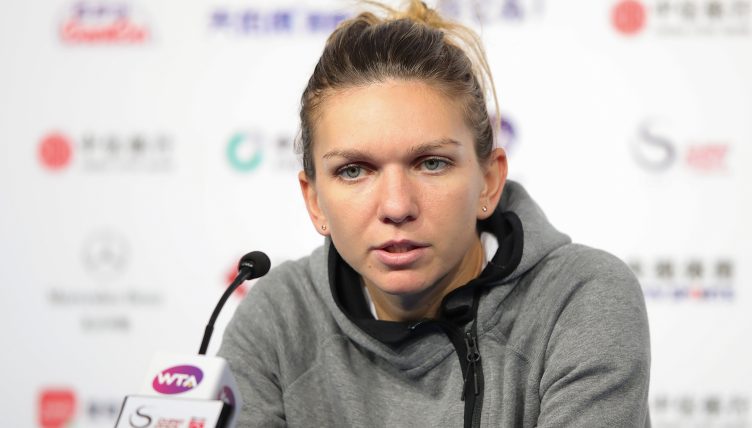 World number one Simona Halep has given a fitness update and confirmed she WILL take her place at the WTA finals.

The Romanian has endured a tough Asian leg of the WTA Tour, twice succumbing to a back injury which has placed her participation in the end-of-year showpiece event in question.

However, she insists all is good.

“I feel pretty ok now. Of course I was worried, but I did a MRI and now I know precisely what’s going on,” Halep said at a youth tennis event at the Stejarii Country Club on Thursday.

“I had back problems in the past, but now it’s a bit more than before.

“I will work on my recovery, doing treatment, physiotherapy, that’s it, nothing else.

“I hope to be ready to play tournaments.

“I think I will have a break for another week, off-court, without tennis, then I will slowly come back.

“I was worried at the beginning, because I did not know what I had, but after I did the MRI and talked to the doctors I can say I relaxed.

“Of course there is a risk, any injury involves a risk, but it’s not such a big risk.

“There is no danger of something very serious happening.

Rumours have been abound that Halep will require surgery, but she has dispelled them.

“I talked with my team, with my relatives and we decided to play.

“It doesn’t matter what the people are saying. It does not affect me at all at this moment.

“Everything that I understand it was said, that I’m doing cortisone injections or I’m going to have a surgery, is false.

“It is very hard to give up, to abandon matches, of course, and this year has not happened very often.

“That’s why I’m going to keep my confidence high and we’ll see what’s going to happen in the future.

“The most important thing is health, but there is no question of surgery.”